Easing inflation pressures and a resolution of the fiscal turmoil in the United Kingdom fueled a strong rally in stocks and bonds early in the fourth quarter. However, hawkish Fed guidance, disappointing economic data, and rising global bond yields weighed on markets in December and equity markets finished the fourth quarter with only modest gains that capped the worst year since 2008.

The end of the third quarter was volatile as global bond yields spiked in response to the spending and tax cut package proposed by former U.K. Prime Minister Liz Truss, and that volatility continued as the fourth quarter began with the S&P 500 Index and S&P/TSX Composite hitting a new low for the year on October 13th. However, that market turmoil ultimately resulted in political change in the U.K. as PM Truss resigned on October 20th and was replaced by former Chancellor of the Exchequer Rishi Sunak, who immediately took steps to disavow Truss’ plan and restore market confidence in U.K. finances. In part due to a very short-term oversold condition and following a no-worse-than-feared third-quarter earnings season, stocks and bonds staged large rallies in mid and late October and the S&P 500 finished the month with a substantial gain, rising 8.1%, while the S&P/TSX Composite gained 5.6%.

The positive momentum for stocks and bonds continued in early November thanks to a growing number of price indicators that implied inflation pressures had finally peaked. The U.S. October CPI report (released November 10th) showed the first solid decline in consumer price data for the year, and that was echoed by price indices contained in national and regional manufacturing reports, as well as other official inflation statistics. Both stocks and bonds enjoyed solid gains in response to the data because, while inflation remained far too high on an absolute level, markets hoped these declines would result in the Federal Reserve (and Central Bank of Canada) not raising interest rates as high as previously feared. Those hopes were boosted after the U.S. Thanksgiving holiday when Fed Chair Powell stated that interest rates would only need to rise “somewhat” higher than previous projections. Investors took that remark as a sign that previous estimates for rate hikes were too aggressive and that extended the rally into early December. The S&P 500 & S&P/TSX Composite ended November at multi-month highs with another solid monthly gain of 5.6% and 5.5% respectively.

However, investor optimism faded in December as global central banks signaled that they were still committed to aggressively hiking rates, economic data showed clear signs of slowing growth, and several negative earnings announcements raised concerns of an earnings recession in 2023. First, at the December meeting, the Fed revealed that they expected rate hikes to take the fed funds rate above 5% (from the current 4.375%), which was higher than market expectations. Then, economic data released in mid-December, including the November U.S. retail sales report, showed economic activity was slowing. Finally, both the European Central Bank and the Bank of Japan surprised markets with hawkish policy decisions, providing yet another reminder to investors that rates will continue to rise in 2023 despite clearly slowing global economic growth and the increasing threat of recession. Stocks dropped from mid-December on, and the S&P 500 and S&P/TSX Composite ended the month of December with a loss of 5.8% and 4.9%.

Internationally, foreign markets handily outperformed the S&P 500 in the fourth quarter thanks to a large bounce in Chinese stocks as Beijing ended its “Zero-Covid” policy and commenced an economic reopening, while a falling dollar boosted global economic sentiment. Foreign developed markets outperformed emerging markets in the fourth quarter thanks in part to a large bounce in U.K. shares following the resignation of PM Truss and the abandonment of her fiscal spending and tax cut plan. For the full-year 2022, foreign developed markets registered solidly negative returns, but thanks to the fourth-quarter rally, relatively outperformed the S&P 500.

Our quarterly market report at the end of this commentary shows the widespread losses in equity and bond markets around the world. According to an analysis done by Edward McQuarrie, an investment historian and professor emeritus at the Santa Clara University, 2022 was the worst year on record for bonds. “Even if you go back 250 years, you can’t find a worse year than 2022”, he said of the U.S. bond market. This is largely due to central banks aggressively raising rates, clobbering fixed income, especially long-term government bonds. The Bloomberg U.S. Aggregate Bond Index declined 13.01% on a total return basis. This index includes all government and investment-grade corporate bonds. In Canada, the FTSE TMX Canadian Universe Bond index fell 11.69%. Bonds are generally thought of as the safe haven part of a portfolio, but 2022 will go down as one of the worst years ever for a balanced traditional asset mix. Going back 85 years, only 2008 and 1974 were worse for a 60/40 equity/bond asset allocation.

In sum, 2022 was the most difficult year for investors from a return and volatility standpoint since the Global Financial Crisis. Multi-decade highs in inflation combined with historically aggressive Fed rate hikes and growing concerns about economic and earnings recessions to pressure both stocks and bonds. The S&P 500 posted its worst performance since 2008 while major benchmarks for both stocks and bonds declined together for the first time since the 1960s, punctuating just how disappointing the year was for investors.

The lone shining star in 2022, outside of cash, was the price of oil and gas and as a result the energy stock sector. In fact, outside of a small gain for the Utilities sector, the S&P 500 Energy sector was the lone positive contributor, posted a huge 65% gain. This compares the U.S.’s largest sector, Information Technology (approx. 25% of the index), declining 28% on the year. In addition, the index’s fourth and six largest sectors, Consumer Discretionary and Communication Services, fell a whopping 36% and 38% respectively. In Canada, outside of the Materials and Industrials sectors which were essentially flat, the only positive sector was Energy, which posted a calendar year price return of 24.4%.

Markets ended 2022 on a negative note and the December losses helped to ensure that 2022 was the worst year for stocks since 2008 and the worst year ever for bonds, as both asset classes posted annual declines for the first time since the 1960s. We believe that Milestone’s investment philosophy, in tune with many respected endowment/pension funds, of using non-traditional asset classes can be of great benefit during these volatile periods, providing relatively strong risk-adjusted returns. Some of these investments provided positive returns for us in 2022.

The losses in stocks and bonds were driven by decades-high inflation, a historic Fed rate hike campaign and geopolitical unrest. But while those factors were clear negatives for asset prices in 2022, it’s important to note that as we enter 2023, the market is approaching a potentially important transition period that could see each of these headwinds ease in the months ahead.

First, inflation has shown definitive signs of peaking and declining. The U.S. Consumer Price Index has fallen from a high of 9.1% in June to 6.5% in December, while other metrics of inflation have registered similar declines. Now, to be clear, inflation remains too high in an absolute sense, but if price pressures ease faster than expected, that will present a positive surprise for markets in the first several months of 2023.

Second, after a historically aggressive rate hiking campaign in 2022, the current Fed hiking cycle is likely nearly complete. In December, the Federal Reserve signaled that it expected the peak interest rate to be just 50-75 basis points higher than the current rate. That level could easily be reached in the first quarter of 2023 and the Fed ending its rate hike campaign will remove a significant headwind from asset prices.

Finally, while both economic growth and corporate earnings are expected to decline in 2023, those negative expectations have been at least partially priced into stocks and bonds at current levels. Some even believe it is mostly priced in. As such, if the economy or corporate America proves to be more resilient than forecasts, as it has proven many times before, it could provide a positive spark for asset markets in early 2023.

As we start the new year, we should expect financial media commentary to be focused on the 2022 losses and current market risks, including earnings concerns and recession fears. But the market is a strong forward-looking instrument, so while there are undoubtedly economic and corporate challenges ahead in 2023, some of those best-known risks are partially priced into markets already, and the truth is that there are potential positive catalysts lurking as we start a new year.

There is the added tailwind that we are currently entering the third year of the U.S. presidential cycle of a newly elected President. This has historically been the strongest year for equities, with the S&P 500 averaging a return of 20.1% since 1950, essentially double the long-term average for all years.

More broadly, market history is clear: Declines of the magnitude we saw in 2022 are usually followed by strong recoveries, not further weakness. The S&P 500 hasn’t registered two consecutive negative years since 2002 (and 1974 before that), while bonds, represented by the Bloomberg U.S. Aggregate Bond Index, have never experienced two negative consecutive years. Research firm Jefferies noted that the last three times the S&P 500 was worse than 2022, it returned over 20% in the following year. And that reality underscores a crucial point; that market declines such as we witnessed in 2022 have ultimately yielded substantial long-term opportunities in both stocks and bonds.

The stagflation of the 1970s and sky-high interest rates of the early 1980s eventually gave way to the strong economic growth and market rally of the 1980s. The dot-com bubble burst of the early 2000s was followed by substantial market gains into the mid-2000s. The Financial Crisis, which remains the most dire economic situation we’ve experienced in modern market history, was followed by strong rallies in the years that followed, and not even the worst global pandemic in over 100 years could result in sustainably lower asset prices.

As such, while we are prepared for continued volatility and are focused on managing both risks and return potential, we understand that a well-planned, long-term-focused, and diversified financial plan can withstand virtually any market surprise and related bout of volatility, including multi-decade highs in inflation, historic Fed rate hikes, geopolitical unrest, and rising recession risks.

Thank you for your continued trust in Milestone and for the opportunity to assist you in working toward your financial goals. We understand the risks facing both the markets and the economy, and we are committed to helping you effectively navigate this challenging investment environment. Successful investing is a marathon, not a sprint, and even intense volatility is unlikely to alter a diversified approach set up to meet your long-term investment goals. Therefore, it’s critical to stay invested, remain patient, and stick to the plan, as we’ve worked with you to establish a unique, personal allocation target based on your financial position, risk tolerance, and investment timeline. 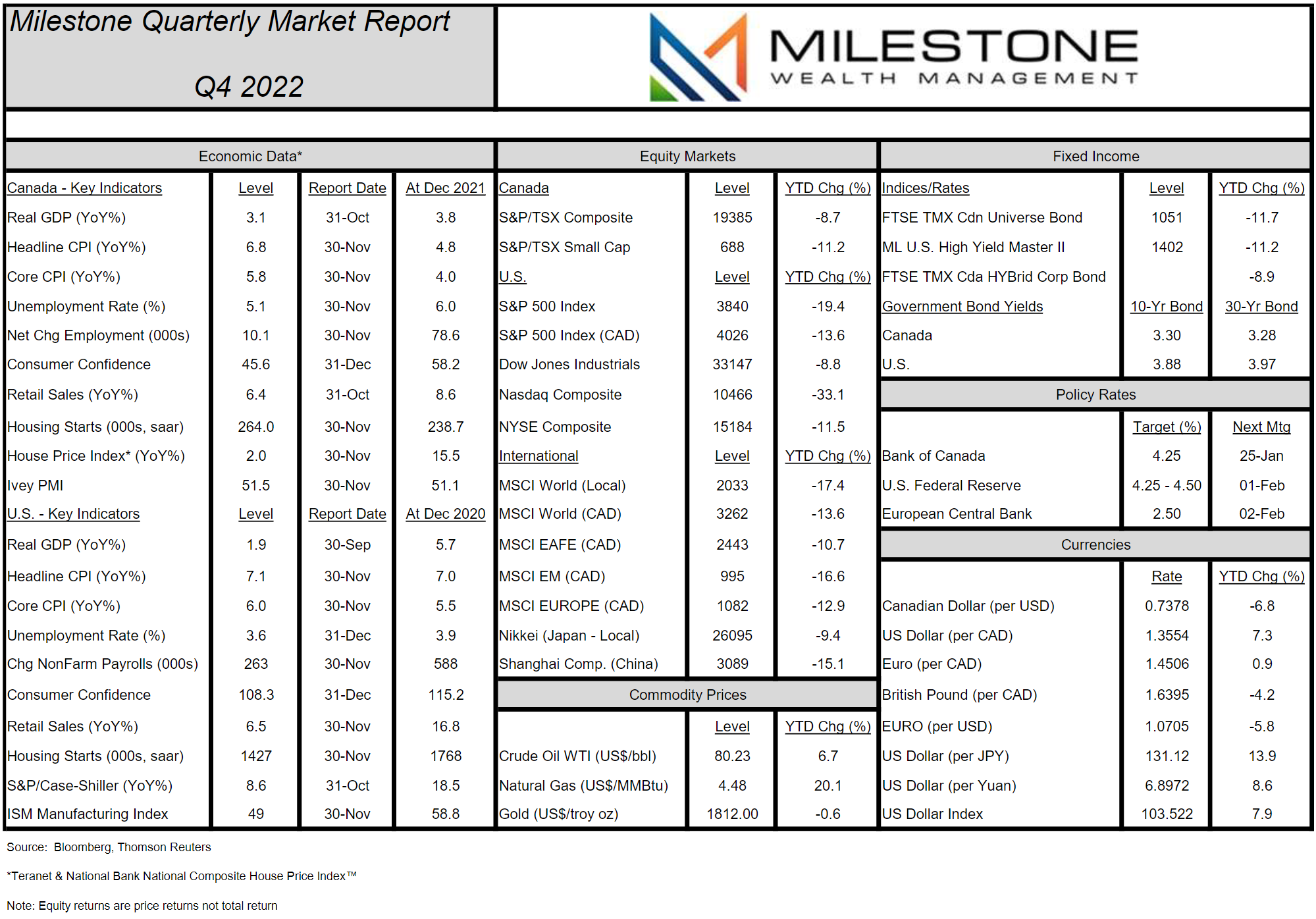