The third quarter opened with a solid rebound in stocks and bonds that was driven by resilient corporate earnings, signs of a possible peak in inflation, and hints from the Federal Reserve that the end of the rate hiking cycle may come sooner than markets initially expected. Starting with earnings, corporate results for the second quarter were much better than feared. Despite high inflation and lingering supply chain issues, the majority of Q2 earnings reports beat estimates, and that solid performance by corporate America showed investors that, despite numerous macroeconomic challenges, U.S. earnings were holding up much better than anticipated. On inflation, several survey-based economic reports showed price declines in June and offered hope that inflation pressures were peaking. Finally, in late July the Federal Reserve raised interest rates by another 75 basis points, but at the press conference Fed Chair Powell stated that, at some point in the future, it would be necessary for the Fed to slow the pace of interest rate increases. Investors interpreted that comment as a signal that the end of the rate hike cycle may be closer than previously thought. Hope for a less-aggressive Fed paired with resilient earnings and a potential peak in inflation fueled a 9.2% gain in the S&P 500 in July (4.7% for the S&P/TSX Composite), its best monthly return since November 2020.

Equities continued higher through the first half of August, driven by more proof of a peak in inflation and the growing hope that the Federal Reserve would soon “pivot” to a less-aggressive policy stance. Specifically, the July CPI report (released in August) showed clear moderation in price pressures, further entrenching the idea that inflation had peaked. Investors welcomed this news and confirmation of a peak in inflation, combined with the aforementioned hope of a “Fed pivot,” pushed the S&P 500 to nearly four-month highs by mid-August. However, the move higher in July and early August was, ultimately, nothing more than a “bear market rally” as in late August. While making remarks at the Jackson Hole Economic Symposium, Fed Chair Powell dismissed the idea of a looming Fed pivot to less-aggressive policy, dashing hopes that the end of the rate hike cycle was in sight. Additionally, Powell warned that the U.S. economy will likely feel some “pain” from the Fed’s actions. The reiteration of aggressive policy and historically large rate hikes combined with the warning of looming economic pain hit stocks late in the month, and the S&P 500 gave back all the early August gains to end the month solidly lower, down 4% (S&P/TSX Composite down only 1.6%).

The selling continued in September, as the August CPI report (released in September) showed a slight increase in prices, implying that while inflation pressures had potentially peaked, inflation was not rapidly declining towards the Fed’s target (meaning rates would stay high for the foreseeable future). Then, at the September FOMC meeting, the Federal Reserve again hiked interest rates by 75 basis points and signaled rates will continue to rise to levels higher than previously expected. Geopolitical concerns also pressured stocks in September as Russia escalated the war in Ukraine by holding referendums in occupied Ukrainian territory, and by announcing a 300,000-person “mobilization” from the general Russian population. Finally, during the last few days of the month, global currency and bond markets saw a dramatic increase in volatility, as the government of the United Kingdom announced a spending package designed to stimulate the economy. But that would also likely add to inflation pressures and the announcement resulted in a spike in global bond yields while the pound collapsed to an all-time low vs. the dollar, adding to general macroeconomic volatility. The combination of sticky inflation, expectations of numerous future Fed rate hikes, rising geopolitical tensions, and currency and bond market volatility weighed heavily on stocks and bonds into the end of September, as both markets finished the quarter near the lows for the year. The S&P 500 fell 9.2% on the month, same as the July gain, while the S&P/TSX Composite fell 4.3%. The wild up and down ride resulted in the US equity market down 4.9% and the Canadian market down 1.4%. On a year-to-date and total return basis, the S&P 500 is now down almost 24% while the S&P/TSX Composite is down about 11%. International equity markets also down well over 20% year-to-date, although we fully exited these markets in our mandates back in March/April.

Throughout this volatility, Canadian fixed income markets were mostly flat, with our FTSE Canada Universe Bond Index up 0.52%, however, remains down significantly on the year at -11.8%, making it extremely difficult for most investors in a diversified and balanced portfolio. In fact, this is the worst first three quarters to start a year on record for a traditional 40/60 balanced portfolio. U.S. bond markets fared much worse in Q3, with the Bloomberg Aggregate Bond Index now down 14.6% this year.

In sum, the third quarter started with optimism surrounding a resilient corporate earnings outlook, a potential peak in inflation, and a closer-than-expected end to the current Fed rate hiking cycle. Unfortunately, throughout August and September that optimism was eroded by sticky inflation data and a more hawkish-than-expected Federal Reserve. As we start the fourth quarter markets remain in search of concrete positive catalysts that signal declining inflation pressures and a less-aggressive Federal Reserve.

As we begin the final quarter of 2022, an honest assessment of the macroeconomic landscape reveals that the markets and the economy are still facing numerous challenges from still-high inflation, ongoing Fed rate hikes, and geopolitical instability. Although the outlook for risk assets remains challenged, that reality must be considered in the context of a market that has declined substantially and already priced in a considerable number of negatives. Valuations on many quality companies are quickly approaching pre-pandemic levels, meanwhile the S&P 500 more broadly is trading at a valuation that has, historically speaking, been attractive over the longer term. The S&P/TSX Composite is actually trading below historical average valuations, providing solid forward-looking return opportunities to those who remain patient. As we noted in our last commentary, but worth repeating again today:

“The stock market is a device to transfer money from the impatient to the patient” – Warren Buffett.

Additionally, multiple sentiment indicators have hit (some even broken records) or are approaching levels that historically have represented extreme pessimism and bearishness, and they are largely ignoring the reality that there has been some improvement in the macroeconomic outlook over the past several months.

First, inflation has likely peaked, and we are now entering a period of disinflation. Multiple inflation indicators are showing a peak and decline in price pressures, and while the Consumer Price Index remains far above the Fed’s target of 2%, any swift deceleration in inflation may be a material positive catalyst for both stocks and bonds.

Second, the less-aggressive Fed pivot will still occur, perhaps as early as the fourth quarter. According to the Fed’s estimates, interest rate increases will begin to slow in the coming months, and the last rate hike for this cycle could emerge in March 2023 or sooner. If that turns out to be the case, and the Fed signals to markets that this rate hike cycle is approaching its end, that will likely be a materially positive catalyst for both stocks and bonds; evidenced by the July and August rallies that were driven by hopes of a less-aggressive Fed.

Third, geopolitical tensions remain very elevated as Russia has recently escalated the war in Ukraine and the risk of a broader conflict simply cannot be ruled out. Most Western countries remain united in their opposition to the Russian invasion of Ukraine and that will continue to be a powerful deterrent to Russian President Putin. Furthermore, even some of Russia’s most important allies, including China and India, have voiced concerns about the escalation of the war over the past month which has further isolated Russia from the global community. Any reduction in geopolitical tensions would provide a surprise boost for global risk assets, including U.S. stocks and bonds.

Finally, amidst a difficult macroeconomic backdrop, the U.S. economy and corporate America have proven impressively resilient. Most measures of U.S. economic growth remain in solid shape, while U.S. corporate earnings estimates have stayed largely elevated, and the widespread earnings declines that were feared back in early 2022 simply have not materialized. Unemployment rates in the U.S. and Canada remain near record lows, and the U.S. consumer’s balance sheet and cash reserves remain healthy for the time being. It is too early to predict that a recession is the most likely outcome for 2023, however, we expect that strong household and corporate finances can limit the downturn into a mild one. In addition, seasonal factors also provide a potential positive catalyst, as history has shown that the year following U.S. mid-terms is the best time to be investing.

Bottom line, the outlook for markets and the economy remains challenged, but investors have again priced in an abundance of “bad” news already, with valuations now at levels that are traditionally attractive. Moreover, according to some indicators, sentiment is as pessimistic as it was during the depths of the financial crisis. If inflation suddenly decelerates quickly, the Fed signals a clear end to rate hikes, or there is positive geopolitical news, the potential is there for a powerful rally in both stocks and bonds. These developments could materialize any time, so it is critical to remain patient and stay invested with one’s core long-term investments as we have worked to establish a unique, personal allocation target based on your financial position, risk tolerance, and investment timeline.

This is a difficult market and a complicated moment for the world, but history is clear: Positive surprises can and have occurred even in challenging times such as this, and through periods of similar macroeconomic turmoil, markets eventually recouped the losses and moved to meaningful new highs. There is no reason to think this time will be any different.

Thank you for your continued trust in Milestone and for the opportunity to assist you in working toward your financial goals. We understand the risks facing both the markets and the economy, and we are committed to helping you effectively navigate this challenging investment environment. 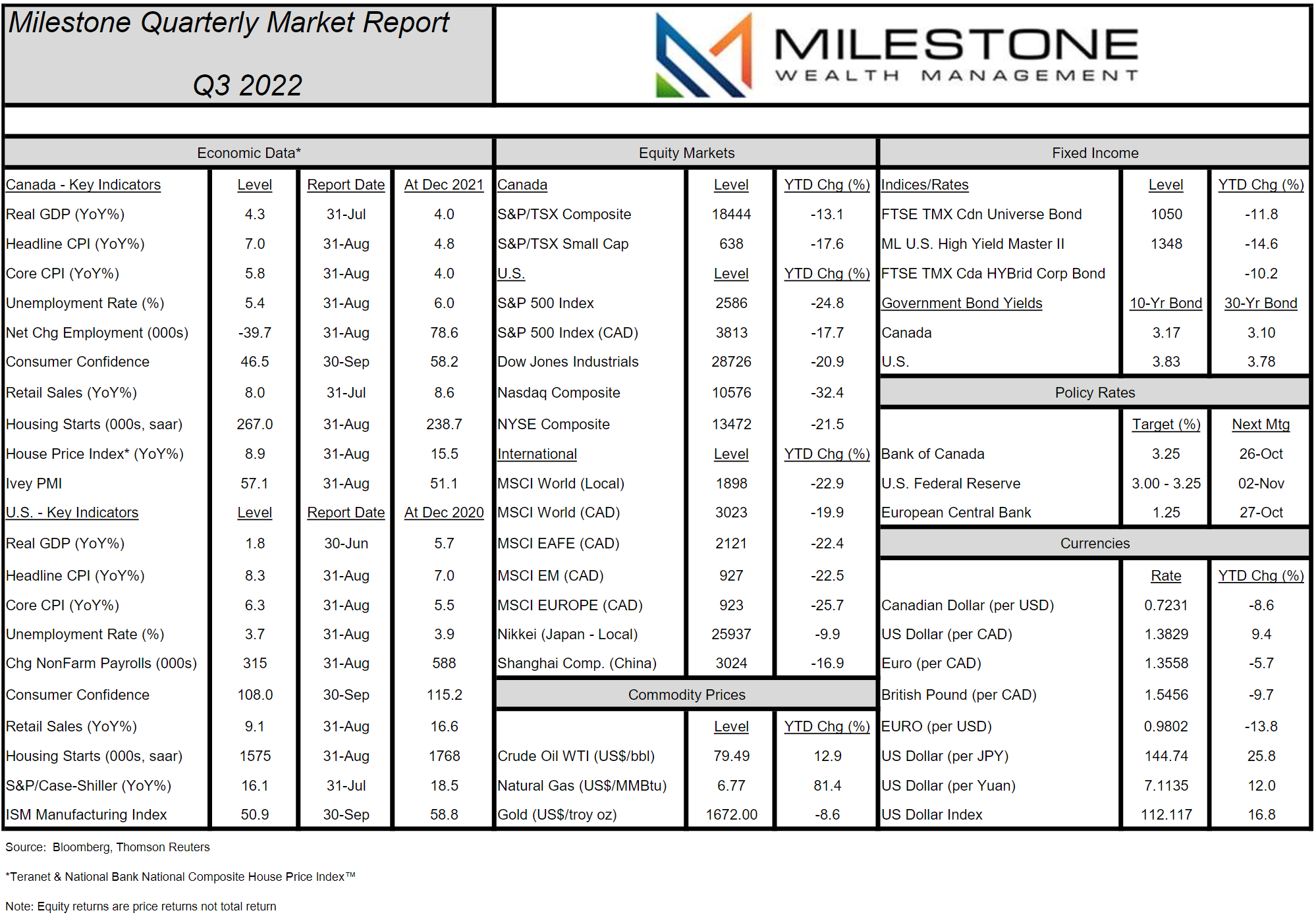