*Please note this will be our last commentary before the Christmas season. Our next commentary will be Friday, January 6th. Happy Holidays!

There are always numerous reasons at any point in time why risk assets, namely equities, move up or down in the short to intermediate-term. Notwithstanding the pullback we have seen in equity markets the last couple weeks, we would like to point to one specific reason as to why we have seen a shift in sentiment towards risk assets since September. Enter the U.S. Dollar Index. This is an index that tracks the value of the U.S. dollar relative to a basket of six foreign currencies, often referred to as a basket of major U.S. trade partners’ currencies. The index moves up or down when the U.S. dollar gains or loses strength compared to the other currencies.

Why is it important? The U.S. Dollar Index is widely viewed as a risk sentiment gauge. Geopolitical risk or economic uncertainty around the world serves as a reminder of the importance of so-called ‘safe haven’ assets, such as the U.S. dollar. Since it is the reserve currency of the world, investors usually seek exposure to the dollar via short-term assets when market sentiment begins to shift negatively, and vice versa when sentiment becomes more positive. In other words, increases in risk aversion tend to be associated with appreciation of the U.S. dollar, and risk taking with the depreciation of the U.S. dollar. This is what we have been seeing since the end of the third quarter, with the U.S. Dollar Index hitting a 6-month low this past Tuesday for the first time in over 500 trading days. 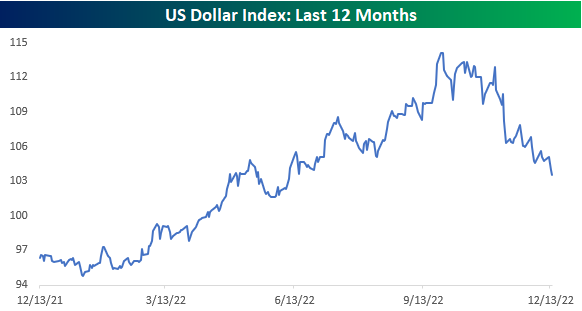 A six-month low in anything may not seem like much, except when it hasn’t happened for over 500 days (504 days this time). Going all the way back to the early 1970s, this is now only the fourth time this has happened. You can see these points in time with the red dots on the charts below. The main point here would be that these red dots have not occurred near market tops. 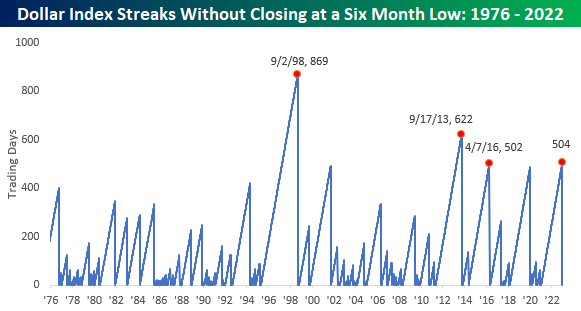 Although this is clearly a small sample size of just three occurrences, it can still provide some telling information when we look at how the S&P 500 has fared after this signal. The table here shows the forward one-year performance, and although the results were mixed in the first month, the median return over the following 3-12 months was very favorable.