Check out this video: This Hawaiian Cat Loves Surfing With His Parents

It has been a nice run of late for equities since their depressed October 12th lows, with the S&P/TSX Composite rising just under 12% and the S&P 500 (in Cdn$) up over 9%. However, the big winner during this period was the international markets (Europe, Asia, Far East), currently up about 15% since then. In addition, the Canadian Bond Universe Index has also enjoyed a nice pop from extremely oversold levels, with long-term interest rates curtailing a bit lately, resulting from Federal Reserve members dialing back their terminal interest rate projections. With any bear market, however, there are oversold bounces within a continued downtrend, and then there are those that end the cycle. We are hopeful for the latter of course, but we have seen an important measure of breadth improve this week, which is very intriguing.

As of Tuesday, 87.7% of the stocks in the S&P 500 are now above their shorter-term 50-day moving averages (DMA) while 60% are above their longer-term 200-DMAs. The shorter-term breadth is very strong of late but still not quite above the August highs. However, it is strength in the longer-term breadth that bulls prefer to see, and that is just what the doctor ordered this week with long-term breadth now stronger than the August highs. As the following chart illustrates, you can see the orange line, which represents the percentage of S&P 500 stocks above their respective 200-DMAs, break-out to new highs. This is a very encouraging sign that this could possibly be more than just a short-term oversold rally, and perhaps the start of a longer-term uptrend. 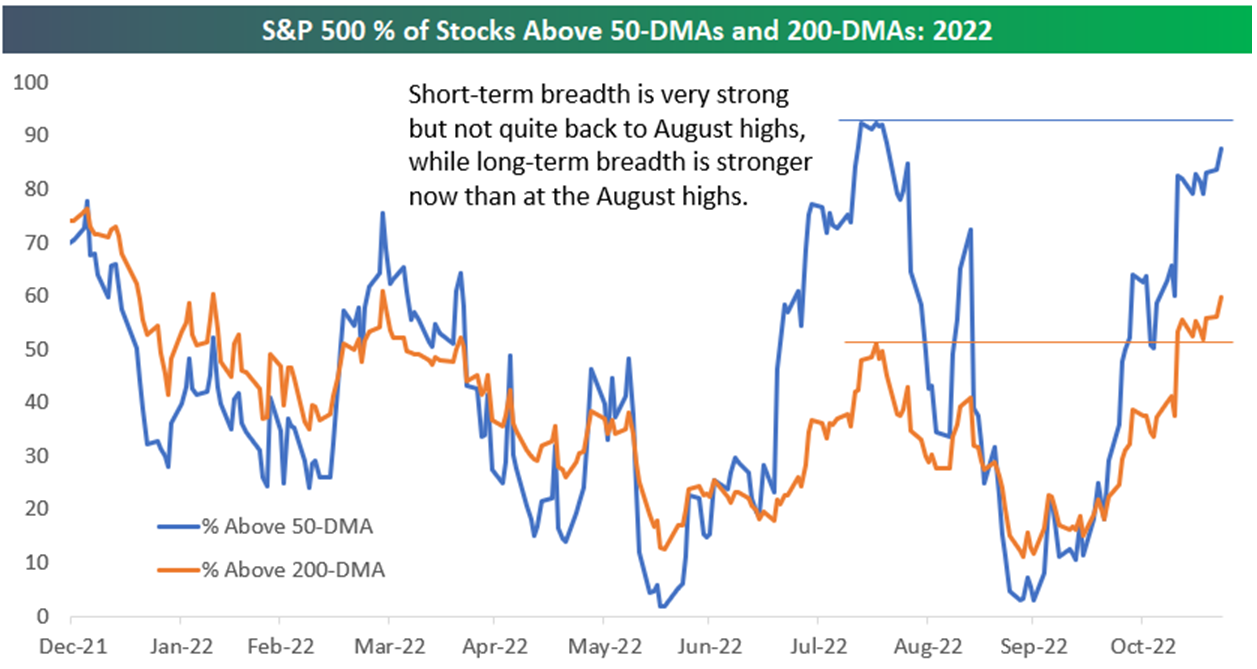 What is interesting is that breadth weakened in the months leading up to the last peak in the markets. You can see the orange line below (long-term breadth) diverging from the blue line (S&P 500 price). Now on the flip side, breadth has rapidly moved up to new highs above August, whereas the S&P 500’s downtrend is still intact and about 7% off from reaching that August high. Breadth usually, but not always, leads price. So again, this is an encouraging signal. 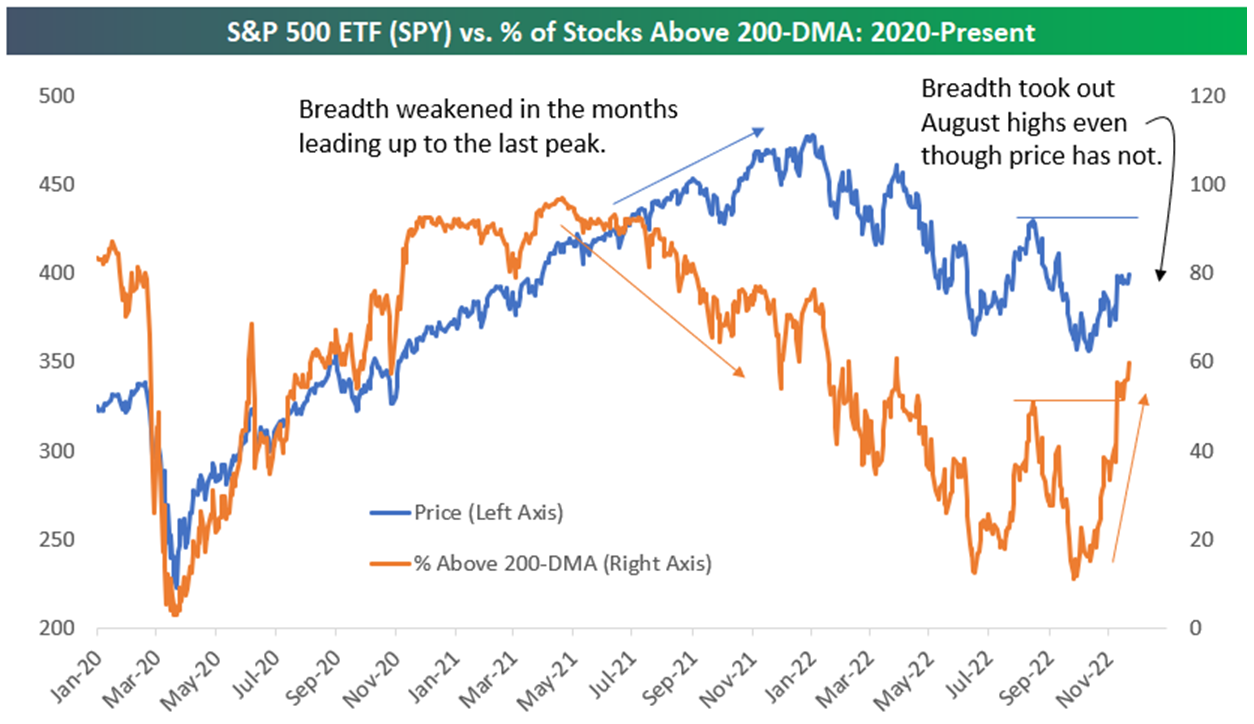 The rapid ascent in the percentage of stocks above their shorter-term 50-DMAs has also been a positive. We have seen the percentage rise from a recent low of 3% all the way up to 87% in less than two months. A rise in short-term breadth from below 5% to above 85% has historically been a very bullish development, and an accurate one at that. As you can see below, the blue vertical lines show the past 11 occurrences of this signal going back to the early 90s. What is important to note is that this signal has been very accurate in denoting either the start or continuation of a bull phase for markets. If you look at the large price declines for the S&P 500 in the table below, the blue line positive signal has almost always occurred after the bottom was realized. Over the past thirty years, the track record for this signal has been virtually fool-proof until just recently, when it was triggered in August, but markets resumed their downward trend into October. We now have this signal triggering again, so we are hopeful that August was a rare false positive, and that this line will in hindsight be a point in time that occurs after a true longer-term low. 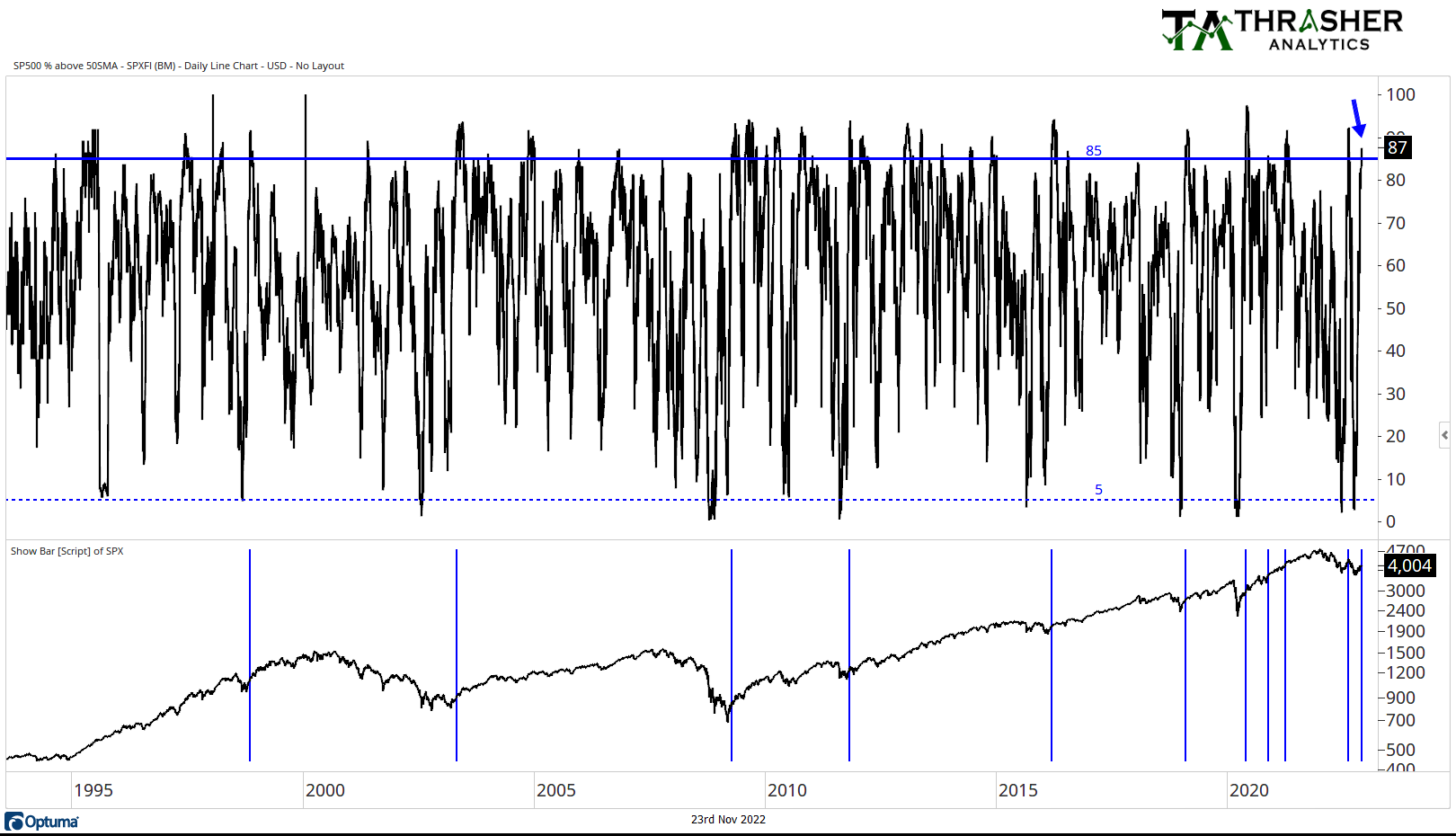