Check out this video: I think he’ll have to take a penalty stroke on this one.

Last week, the U.S. Dollar Index, which is a composite of the value of the U.S. dollar relative to a basket of its six largest foreign trading currency partners (including the Canadian dollar), suffered its fourth largest weekly decline (-4.1%) in at least 50 years, and just the sixth weekly decline of over 4%. This information may help explain, in part, the reason we have seen equities surge recently in the wake of last week’s lower than expected CPI reading. Here is a chart showing the prior points in time (red) where we have seen the U.S. Dollar Index fall more than 4% in a week. 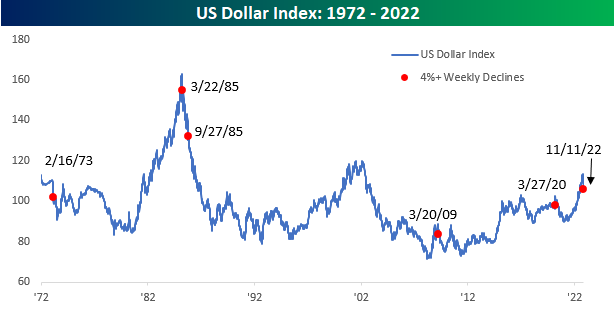 The next table shows how the U.S Dollar Index has performed following these occurrences, and one can clearly note that this points to further weakness ahead for the U.S. dollar. We will point out that the Canadian dollar only makes up 9.1% of this index, so it doesn’t necessarily mean strength for the Canadian dollar.

What does a weaker U.S. Dollar Index mean for equities? Although this is a very small sample size of just five prior occurrences, a weekly decline of this magnitude for the U.S. Dollar Index in the past has proven to be extremely positive for U.S. equities. As you can see in the following chart (red dots showing the past occurrences) and table, the S&P 500 has returned a median return of ~16% over the next three months, and ~30% over the next six and twelve months. The 1973 period was the only outlier, resulting in negative returns. This was also a period where inflation was rising; however, the instance in 1973 came before inflation exploded higher. Today, this has occurred after inflation has skyrocketed to 9%. Only time will tell if this is an important difference, and if this time will be more like the last four occurrences.