Check out this video of two pet otters getting a new swimming pool.

This year, Fridays have been notoriously volatile for equities as the S&P 500 experienced a gain or loss of over 1% on the last trading day of the week for the 22nd time last Friday. In addition, the S&P 500 closed out that week with a 1%+ gain or loss for the fifth straight week. Today, this streak ended with the S&P 500 finishing down only 0.72%. It is just the 12th time this has happened since 1952 when the NYSE first started the 5-day trading week and eliminated trading on Saturdays. The following chart shows all occurrences of five straight weeks or more. There have been just four other streaks of six weeks, and only the 2020 ten-week streak during and after the COVID crash lasted longer than six weeks. 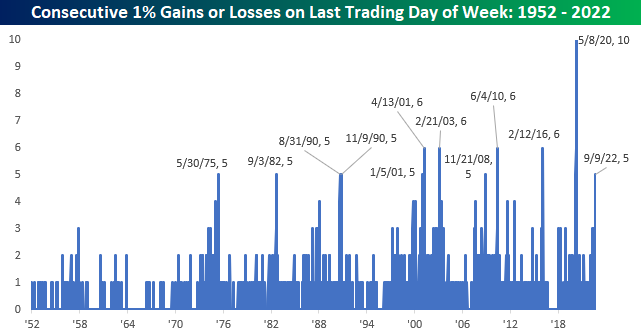 Volatility on a Friday is often a sign of uncertainty in the markets, and there is no doubt this year has been filled with just that. More often than not, volatile markets occur during periods when the market is weak, and this signal could certainly mean that volatility remains in the near-term. However, in markets, uncertainly often breeds opportunity, and in the past these occurrences have typically been followed by strong forward returns. For periods where the S&P 500 experienced this streak of five weeks or longer, forward performance tended to be weak in the very near-term (next few weeks), but much stronger than average over the intermediate term, especially over the next six-to-twelve months. The average one- and three-month forward performance in the past eleven occurrences produced returns of 4.5% and 5.3%, respectively, well over twice the historical average on the latter. For six and twelve months later, the average forward returns were 12.7% and 23.8%, which is close to three times the historical average of 4.3% and 8.9%. The positive return success rate of this signal over the following year has been 82%. In terms of maximum loss over the following year, performance wasn’t necessarily in a straight line as the maximum drawdown averaged just over 8%, but that is still close to being in line with historical average. On the flip side, the average maximum gain over the following year was close to three times the historical average, never lower than 5%, and in all but three periods the maximum gain was over 20%. 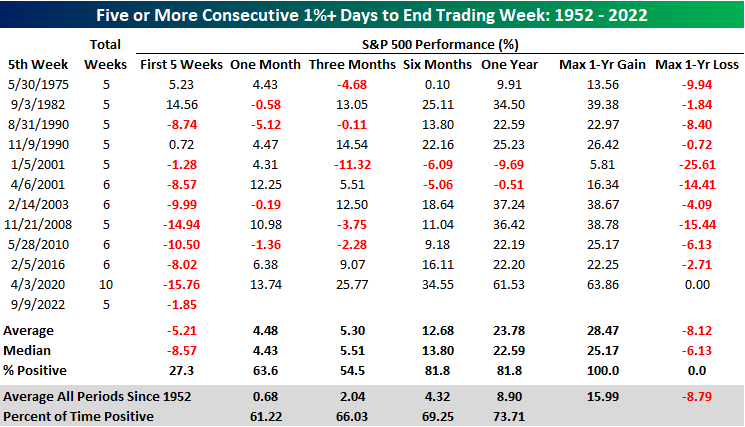