Check out this video of a high school basketball game with several back-to back half court baskets.

This week, we’d like to draw your attention to the price of North American natural gas. We last showed a chart like this in the spring when natural gas first spiked to around the $9.00/MCF level. Subsequent to that, the price dropped quickly, but has since been surging once again. Whereas this doesn’t bode well for your winter heating bill, it should be a very bullish sign for Alberta’s natural gas-weighted companies like Tourmaline (TOU) and Peyto (PEY). In addition, if the commodity price stays elevated, this should significantly help the Alberta government’s budget projections.

Whereas the natural gas price in North America has gone up significantly in the past few years, it pales in comparison to the natural gas prices being seen in Europe which were recently over $50/MCF. Being that most of the world has been trying to move away from using coal to generate electricity, towards the cleaner burning natural gas, this is causing massive financial hardship throughout Europe and could get worse this winter. This has led to demand actually beginning to shift back towards coal. The following chart shows that the rise in the coal price over the past two years has been quite remarkable. 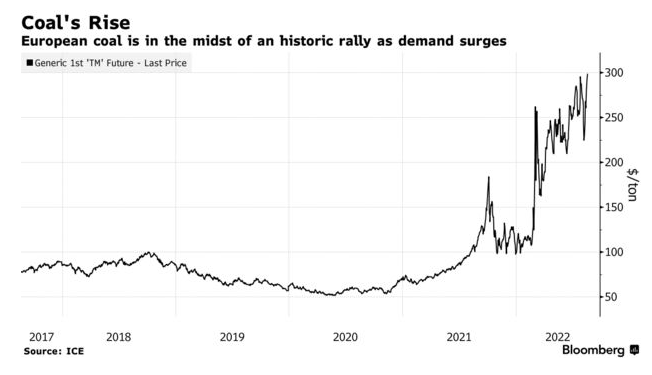