Check out this video of a Bugatti built from Lego.

We will start this week’s Charts of the Week showing the recent and continued surge in insider buying of NASDAQ Composite (NDX) stock positions. Insiders are the executives that actually operate the companies and presumably know the most about what is going on inside those enterprises. History has typically shown that insiders have often been a bit too early, but more often than not, correct on their calls in the long-term versus average returns. Right now insider buying is the highest it has been in at least 12 years. It will be interesting to see down the road if their timing was correct this time. 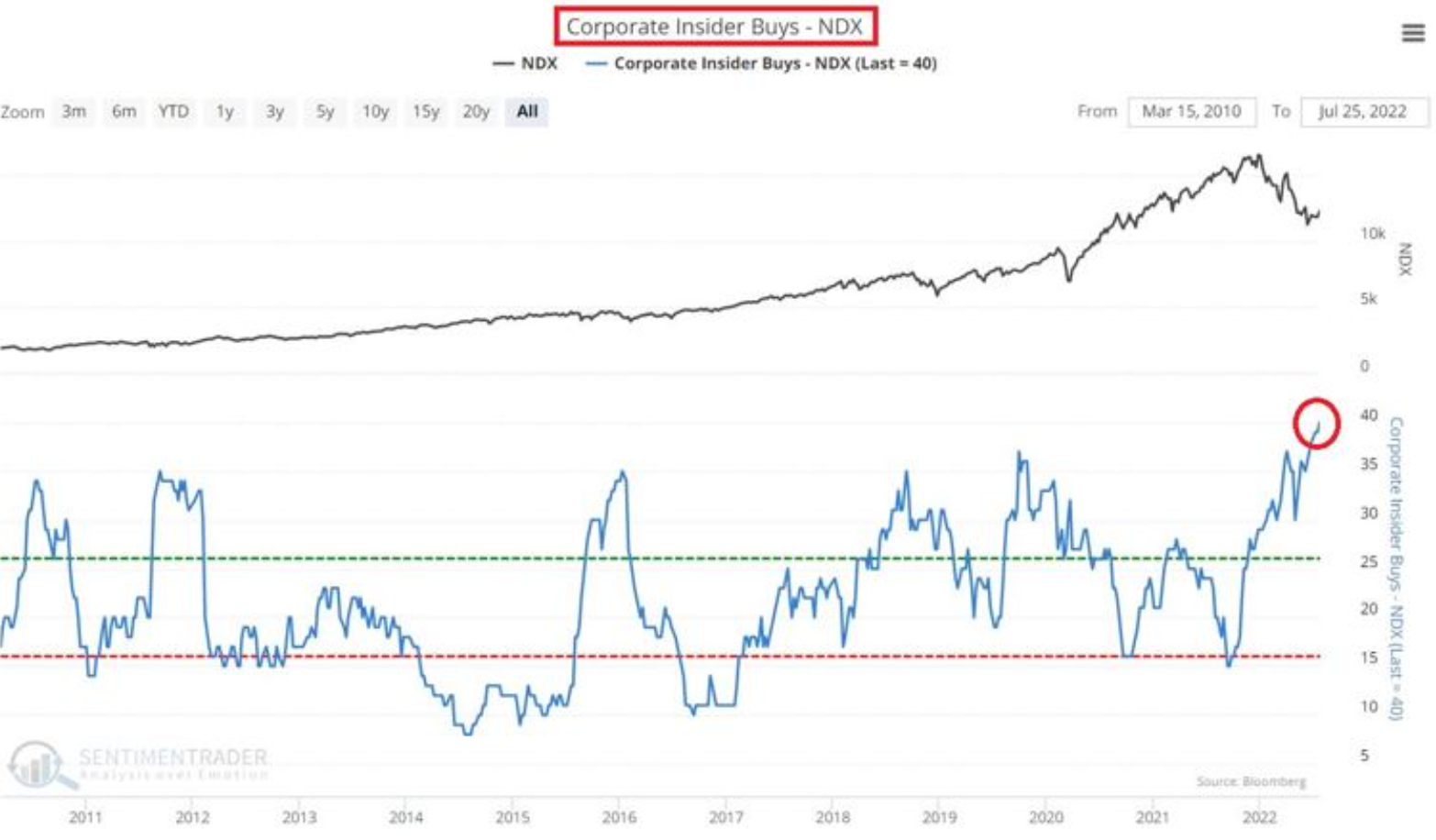 Our main topic today is the recent decline in headline inflation. On Wednesday, the U.S. Bureau of Labor Statistics (BLS) reported that the Consumer Price Index (CPI) decreased from June to July on a year-over-year basis. While inflation as measured in CPI’s change from a year ago or in the last few months versus the few months prior is still very high, the negative inflation print month-over-month, along with a recent decline in the Producer Price Index (PPI), is being seized by markets with a more positive sentiment shift. Could these recent numbers point to the fact that the worst of the inflation pressures has passed? Only time will tell, but U.S. leading indicators for most areas of the market, from services, to autos, to food, to housing & rent and to recreational goods, are suggesting that core inflation pressures are set to slow. As we have noted in past comments, markets move based on expectations and the rate of change, more than the absolute level (market have already priced that part in), so markets will generally take this latest inflation data positively. 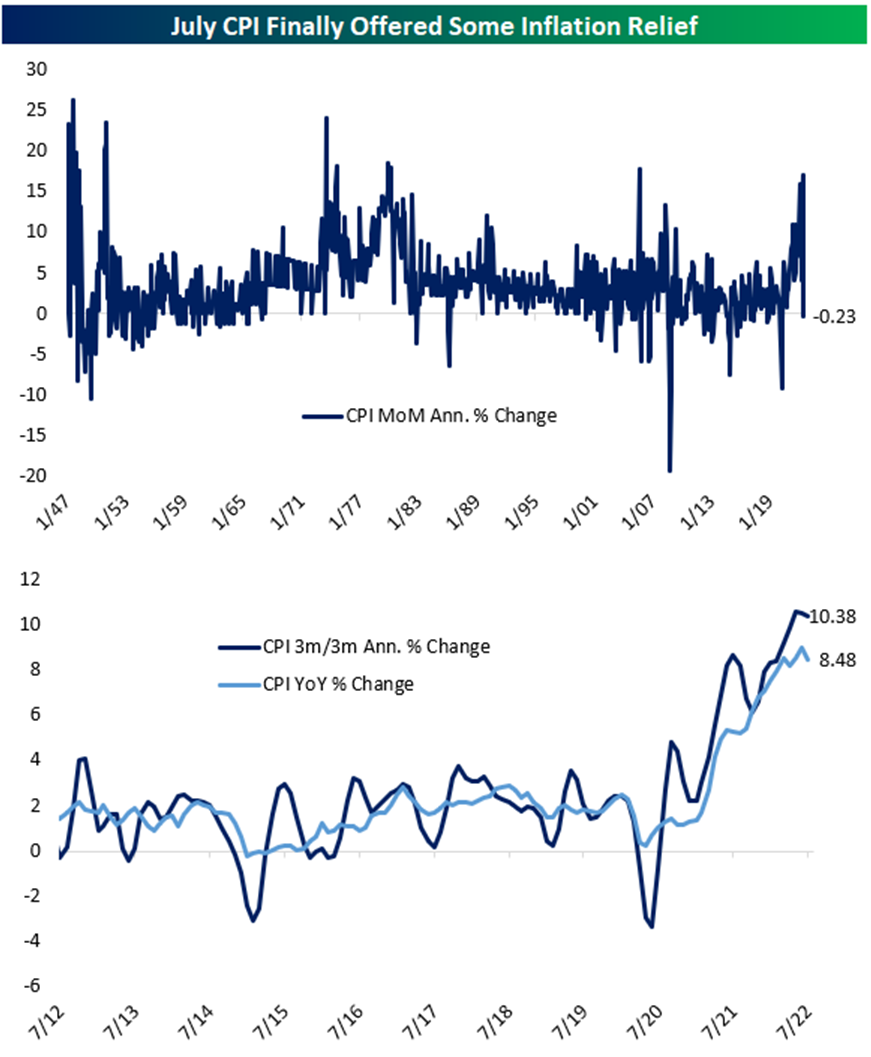 How would further declines in the rate of change for inflation affect equities? In general, when CPI is decelerating, as the latest numbers suggest and with leading indicators showing it will slow further still, stocks should perform better going forward. The following two charts show that while declines in year-over-year CPI do not lead to massive equity market outperformance, there is clearly a solid benefit to stocks. 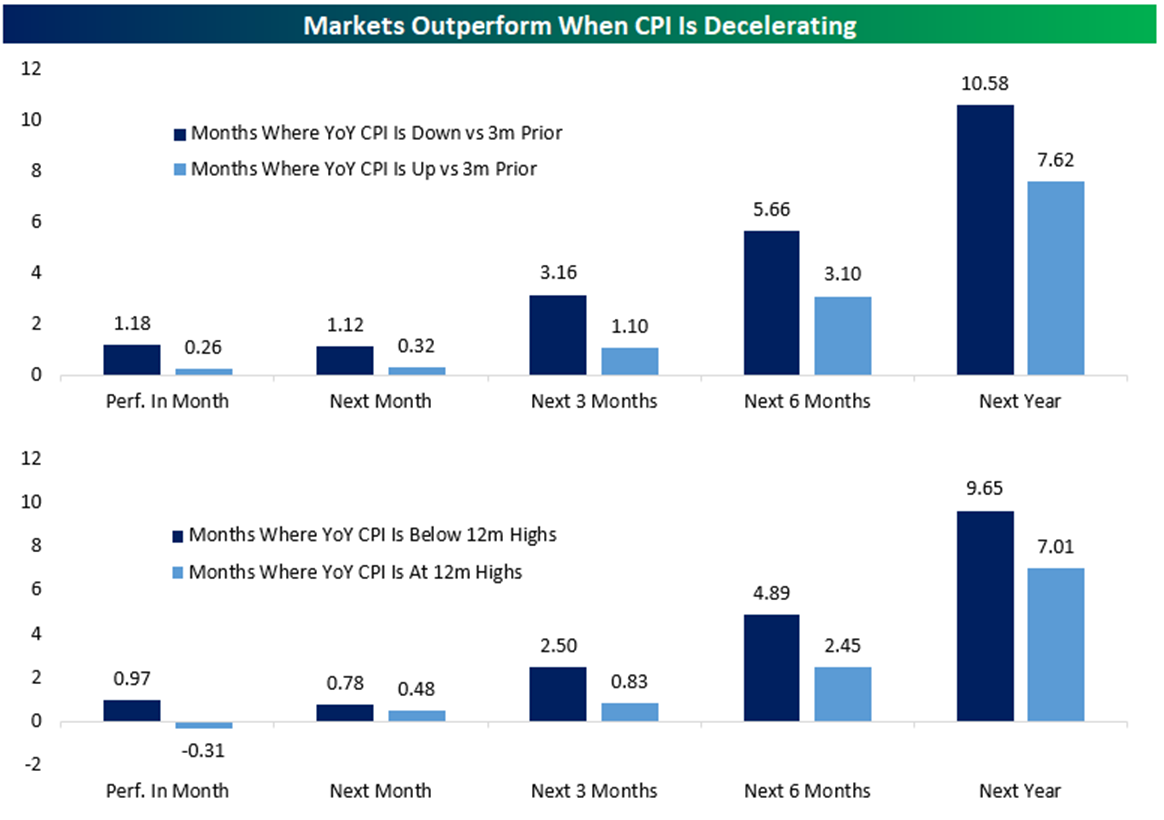 Lastly, and perhaps most important, is to look at market inflation pricing or ‘breakeven inflation’. Breakeven inflation is the market pricing of inflation based on the yield spread between nominal U.S. Treasury yields and inflation-protected Treasury yields. As we noted above, markets tend to move more on expectations versus what has already occurred. As shown below, when 5-year breakeven inflation rates are more than 0.75% below the 52-week high, as they are at present, forward equity market performance is much higher than other scenarios. While we do not think that the very recent data points of slowing inflation is enough or is the cure all, it will likely improve investor sentiment to some extent. The key will more likely be a pivot in the U.S. Federal Reserve and their current rapid monetary tightening (i.e., rising interest rate policy), which does hurt equities. However, any decline in the rate of inflation should be seen as a sign that monetary policy may be less tight in the future than otherwise would have been.