Check out this video of an incredible America’s Got Talent audition.

As expected, on Wednesday the U.S. Federal Reserve raised their overnight rate by 0.75% to a range of 2.25% - 2.50%. It may surprise many that stock and bond markets actually responded very positively to this announcement. In the bond market, interest rates actually dropped across most maturity terms, thereby increasing the prices of those bonds. The stock market also bounced, especially growth markets like the tech-heavy NASDAQ Composite which rose over 4% on the day. As an aside, a large one-day gain of over 4% for the NASDAQ, especially when it hasn’t occurred in over three months like now (17 occurrences now since 1971), has historically been a good indicator of well-above average forward returns over the next year. Markets have continued to move higher the last couple of days as well. Why? Well, the key in our view is that in reaction to the report, we have seen what is called a yield curve steepening. This means that the interest rate on long-term bonds have dropped less than the interest rate on short-term bonds. They refer to this as a yield curve bull-steepening and is normally associated with a market perception that the Fed will be less aggressive in hiking interest rates than is currently priced in the bond market, leading to a need for higher longer-term inflation risk premiums or a steeper yield curve. This is one of the items we mentioned in our quarterly comments that could be a potential upside surprise for markets in the back half of this year, and especially the summer, where since June we have been referencing that we believe there was a strong setup for at least a short- to intermediate-term rally for equity markets from extremely oversold levels. This has come to fruition with the S&P 500 Index now up about ~12% since its June 16th closing low, while the NASDAQ is up 16% since then. This surely does not mean the cyclical bear market we are in is over, but it has provided at least some short-term relief.

As the following chart shows, the U.S. 5-to-30-year treasury yield curve (difference between the 5-year and 30-year treasury yield) has steepened dramatically over the last couple of days through July 28th by 0.16%, among some of the largest 2-day moves we have ever seen over the last 20 years. There is something in aerospace engineering referred to as “max Q” which is the point of a rocket’s flight where pressure is the greatest. We could potentially apply this analogy to where we are with the current U.S. rate tightening cycle, that perhaps its own “max Q” has passed, and the market has already priced it in. In general, this would be a positive for growth equities. 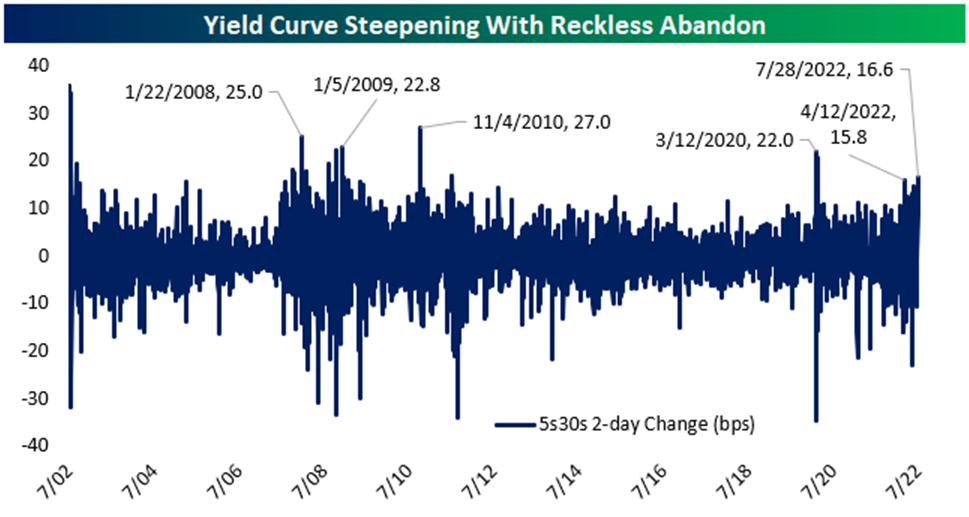 As a result of this, the market’s perception of a less restrictive Fed also implies that real yields (yields after inflation) are falling and that is certainly what we have been seeing recently. You can see in the chart below that U.S. 10-year Treasury Inflation Protected Securities (TIPS) have come down. 10-year TIPS are treasury yields that are indexed to inflation; in other words, they offset the effect of rising prices by adjusting its principal value as inflation rises. This is represented by the light blue line, which is inverted on the chart so that we can show you its correlation with equity markets. When real yields are dropping, which coincides with a less restrictive monetary policy, equity valuations normally increase. The dark blue line is the forward 12-month price-to-earnings multiple of the S&P 500 Index, and you can see it has come up from a level below 16X in June to close to 17X today. We also mentioned this in our quarterly comments, that after the recent correction, equity valuations at the end of June had come right back down to historical average (if not slightly below), which we felt would provide some strong support for equity markets going forward. We are certainly not out of the woods yet, however; inflation may have recently peaked but will remain high through the balance of this year and likely 2023 as well. In addition, the Fed could react to this with a more restrictive policy tone at its next meeting in late September, potentially knocking the wind out of this current momentum. Therefore, a continued active approach to asset management complemented with risk management strategies should continue to be the favored strategy. 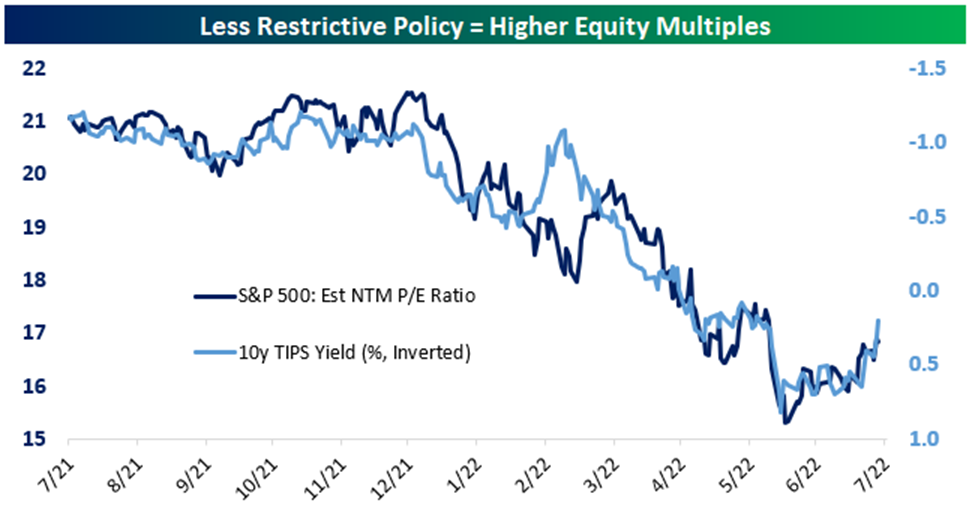