Check out this video of a scuba diver getting photobombed by a shark.

The tone to markets this week was an improvement from last week, especially for the S&P/TSX Composite. The title “The Streak Finally Ends” is referring to the streak of the S&P 500 Index trading below its 50-day moving average (DMA). This week, the U.S. large cap market finally managed to trade and close above its 50-DMA, ending a streak of 60 consecutive trading days. As the chart below shows, it also appears to have closed above the downtrend line created from the March high. While this by no means ensures the low is in, it is an encouraging sign that June may be a low. Since the middle of June, we have been saying there is a strong set up for a potential short-term summertime rally that could at least recover some of the recent pullback. However, a longer period of time of market support above the pre-COVID high, a declining headline inflation number in the second half of this year and a change in tone from the Federal Reserve later this year in terms of tightening financial conditions, is likely needed to ensure the low is in.

If you are wondering if the streak of 60 consecutive trading days below the 50-DMA is a long time historically for the S&P 500, it certainly is. In fact, since WWII, this is the longest streak since December 2008 (about two months before the market’s ultimate bottom), and the 31st streak of 50 or more trading days. 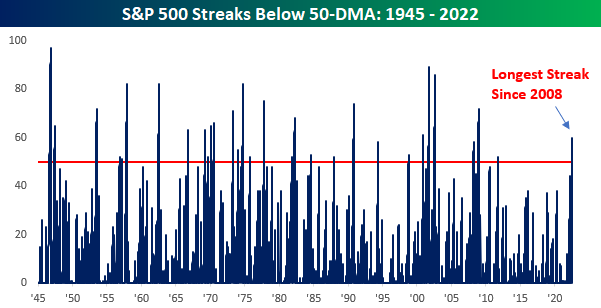 While it is encouraging that this negative trend has ended, we think that the accompanying signal of the S&P 500 ending the streak with a rally of greater than 2% is one worth noting. The following table shows the historical performance of the S&P 500 after the end of these 50+ day streaks below the 50-DMA. The light blue bar shows how it has performed after the streak ends and the dark blue line is all periods. As you can see, while very short-term performance has been better than average, it has not been an overly positive sign over the next 3- and 6-month periods, but importantly it has been a strong sign of outperformance over the following year. However, of the 30 prior occurrences, there have been only 10 where the streak ended on a day with the S&P 500 surging more than 2%, like it did on Tuesday. This is shown by the grey bar below. This paints a much different picture, showing that when this has occurred, the forward-looking performance has been extremely strong, with median outperformance over every time period. Over the next 6- and 12-months, the S&P 500 has returned more than double the median return for all periods. Also worth mentioning, the one-year return has been positive in 100% of the occurrences of streaks ending with a 2%+ rally. While this is not indicative of future results today, we hope this signal stays true this time around.