For all you dog lovers, check out this video of a half dog/half kangaroo. Sort of.

This week we wanted to share a couple charts from our second quarter market commentary. The table below shows the worst twenty six-month periods for the U.S. Wilshire 5000 Index (more encompassing index than S&P 500), with the current period highlighted in blue. As illustrated, and perhaps not surprisingly, forward returns have been extremely high after that point relative to all periods. 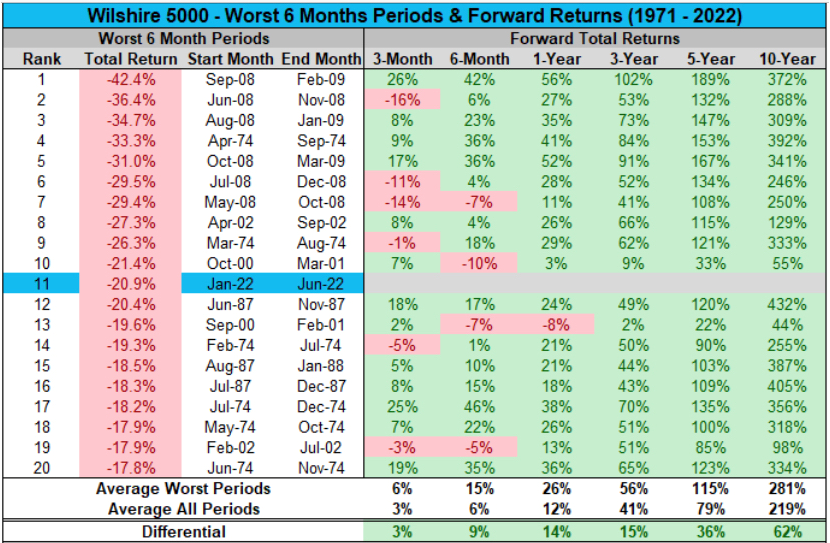 In addition, with the recent correction in markets, valuations have come right back down to normal to slightly under the long-term average. This should provide significant support for markets as institutions look to add to their equity exposure at these levels. The PE Ratio is on the horizontal axis. This is what is known as the price/earnings multiple and in general the mostly widely followed measure of stock valuations. Quite often what is reported is the 12-month PE ratio (rear-view looking), but this is referencing the forward consensus PE estimates, which in our view is more important as it already factors in all the earnings revisions which have come down over the last few months. As we have reiterated recently, we believe there is a good setup for at least a short to intermediate-term rally for markets over the summer, with inflation peaking right now and set to decline as the year progresses, and with markets likely already pricing in all the rate hikes we are going to see this year. As we have noted in our quarterly commentary, U.S. households remain relatively strong, and with the market having priced in a significant amount of negatives, we could see some upside surprises over the coming months. 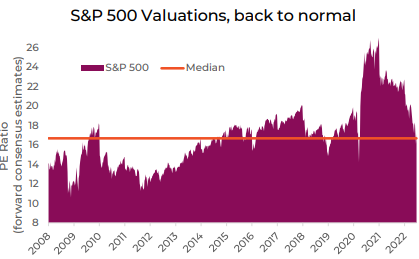