Check out this video of a kangaroo shaking hands with its savior.

After a washout in June and equity valuations moving back to or below long-term averages, there had been a lot of negatives built into prices. With most indicators showing inflation has peaked in Q2 and now beginning its slow decent in the second half, and with terminal interest rate hikes by the Fed mostly priced in, market breadth is starting to improve. In fact, even though markets fell to much lower lows in June, the low in market breadth for the S&P 500 occurred in May. Breadth in the markets refers to how many stocks participate in a given move in an index or on a stock exchange. Sometimes when there is a divergence between breadth and price, it can give an early indication with breadth leading price. As we stated in previous comments, we believe there is certainly a strong set up for at least a short to intermediate term uptrend, due to historically extreme negative sentiment and the possibility of upside surprises in the second half. We do not expect markets to rip back to 2021 levels necessarily, but we do think a significant portion of the ‘froth’ that built up in 2021 has been removed.

The following chart shows one breadth measure which is the percentage of stocks in the S&P 500 that are trading above their 50-day moving average. After recently falling to a historically extreme low level of below 2%, it has since quickly shot back up to over 20%. This has only occurred three times in the last five years, with the prior two instances occurring shortly after a large market correction at the end of 2018 and the first quarter of 2020. This is certainly a data point worth holding on to for the bulls. In fact, going back further in time, this indicator has actually been an exceptionally reliable and positive forward-looking indicator. There has been a total of 13 data points now since 1950, with 12 of them having a forward 12-month return of over 20%. Some of these data points did occur prior to the ultimate bottom, as opposed to the last two times, so it does not mean that markets are out of the woods just yet. However, even those past instances where it occurred prior to the bottom, it was much closer to it than far from it. If you look at the last two big recessions, the 12-month return after the 2002 signal was 13% (followed up by some strong subsequent years) and after 2008 it was 29% which was the beginning of the secular bull market that we are still in. For some other data points, the 12-month forward return after the 2011 signal was 23%, after 2018 it was 30% and 2020 it was 23%. The average 12-month forward return has been 24% over the last five signals since 1990. 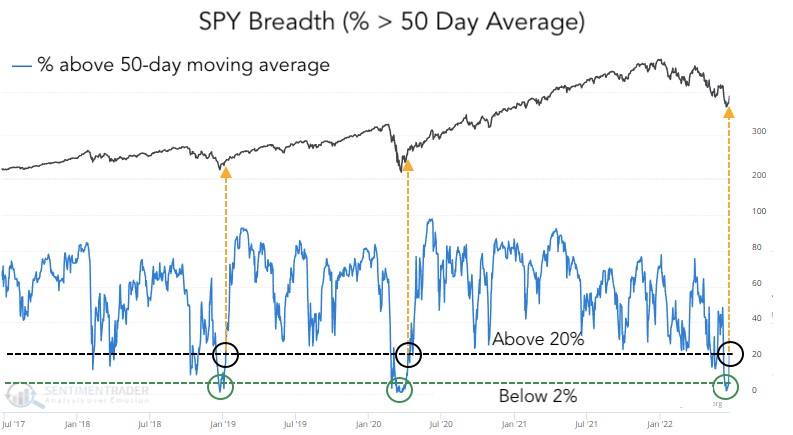