Market Insights: Tough First Half of the Year Comes to a Close

Check out this video of a girl standing up to the dark side.

The first half of 2022 has been an extremely difficult environment with bonds in a correction and equities in a cyclical bear market. However, we continue to view this within a longer-term secular bull market that has years to go. According to Fidelity Investments & Bloomberg data, equity valuations, based on trailing and forward price/earnings (P/E) multiples, have now come back down to the long-term average. The average trailing 12-month P/E ratio for the S&P 500 since 1955 has been 17.1, and as of June 22nd it was also at 17.1 (and likely lower this week which would put it below the long-run average). With valuations now at reasonable levels, active management should provide solid investment opportunities over the coming weeks and months.

As we noted in a recent commentary, we still believe that markets are currently set up for a potential summer rally given the historically extreme oversold levels, record levels of investor pessimism, along with some early indications that year-over-year inflation is peaking (although a few months later than most anticipated). On the last point, importantly, in recent news this week the Federal Reserve reported that the M2 measure of the money supply (cash, chequing accounts, savings and time deposits, money market securities) grew only 0.1% in May and is up a relatively moderate 6.6% from a year ago. The economy still must absorb the massive increase in M2 from 2020-21, which means high inflation for a while longer yet. But at least for now, the Fed has reduced the pace of money growth so that, if it maintains this lower pace, inflation can eventually return to lower levels.

While we have been in drawdown periods like the current one before, they can understandably cause uncertainty, and unfortunately individual investors often panic and exit markets are the least opportune times as historical money flow data has shown. Larger, more patient institutional investors are often the ones on the buying end of those transactions, as we have referred to as money transferring from weaker to stronger hands. Let us reiterate the important quote from our comments two weeks ago, “The stock market is a device to transfer money from the impatient to the patient” – Warren Buffett.

We encourage investors to focus on their long-term objectives and remember that time in the market has always proven to be a better approach than timing the market. This is because quite often the strongest and most powerful moves up occur after the highest points of volatility and after money has shifted as described above. The following chart shows just how costly it can be to sit on the sidelines in an attempt to try to time market upswings or recoveries. The data covers the time period from 1990 to June 16, 2022, which is a 31.5-year time period which is not dissimilar to the length of time individual investors are in the market growing their capital. The green bar is what $10,000 invested into the S&P 500 Index on January 1, 1990, has turned into today. The various blue bars illustrate how that $10,000 has performed by simply missing the best one-day periods in the market. Clearly, one must be in the market to earn the return of these best days. It may shock many to see that if you only miss the 10 best days (as we mentioned, these often occur after a big decline), the increase of $10,000 to $203,985 drops wildly to $93,453, and if you are out of the market on the 30 best days, it only increases to a meager $35,058 which is less than a fifth of the amount if one stayed invested.

Source: Fidelity Investments Canada ULC. (S&P 500 Index total returns from January 1, 1990, to June 16, 2022, in U.S. dollars. The best days were replaced with a 0% return to highlight the overall cost of missing them over the period analyed. Past performance is no guarantee of future results. It is not possible to invest directly in an index.)

To finish off this week, here is a chart potentially signalling capitulation. A period of capitulation refers to the dramatic surge of selling pressure in declining markets that marks a mass surrender by investors, with the resulting drop often marking the end of the decline. As of last week, there are a record percentage of companies that are now trading below the value of their cash and short-term investments, a level even greater than 2008. 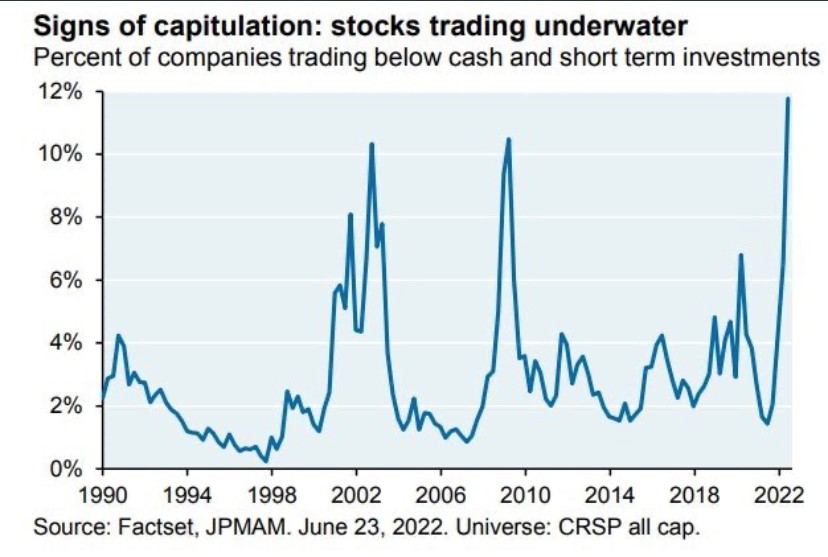