Check out this video of a girl learning to count backwards.

The stock market achieved a small recovery from the recent leg of the current intermediate downturn. Prior to this week, the S&P 500 had dropped over 5% for two weeks in a row, for only the eighth time since the end of WWII. Whereas this is a painful moment in the markets on a short-term basis, let’s take a look back at the previous seven instances for some indication on what might happen from this point. In the following chart, one can see that all of those instances were at least somewhere near the bottom of their respective market pullbacks. Whereas this doesn’t predict anything for today’s market, it does put things into perspective for the longer-term outlook that we may once again be somewhere near the ultimate low in this cycle. 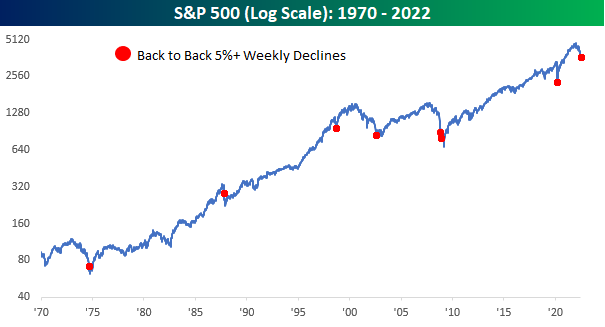 When attempting to assess how oversold a market is and whether stock valuations have gotten ‘cheap’, one indicator is the percentage of stocks that are trading above the price targets that analysts have assigned to the companies. When the stock market is high, valuations get rich and sometimes stock prices exceed what analysts believe to be full value. In the following chart, one can see that as of June 16th, the percentage of S&P 500 stocks above their respective price targets was only 0.20%. When comparing this level to prior market bottoms, one can see that this is a very rare moment historically. Notably, even at the Great Recession low of March 9, 2009, there were still 4.67% of stocks trading above their price targets, much higher than today. This gives us some comfort that at these levels, some real value is starting to appear in the market. 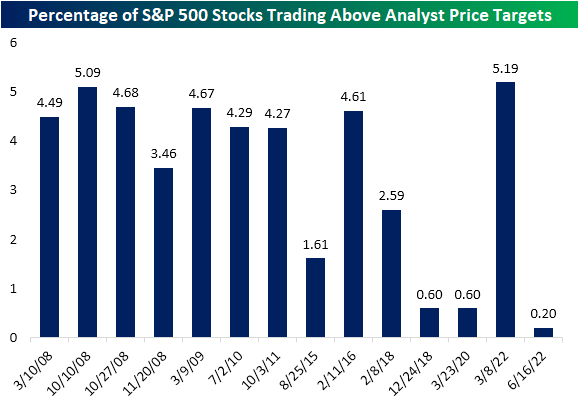 Market corrections and bear markets can be frustrating in the short-term, but they are a part of the investing process. In fact, they can ultimately be considered a long-term positive as they allow the market to get back to reasonable valuations and allow patient investors to buy in at those more reasonable levels.