Love him or hate him, but this walk through Conner McDavid’s house is worth the watch.

We have been discussing negative sentiment and inflation recently but wanted to change gears a bit this week to show what company executives (insiders) are doing in the United States. This falls in line with our recent weekly comments back on May 5th about Warren Buffett, where we noted that in the first quarter he bought up $41.5 billion dollars worth of net equities with 80% of those buys occurring during a volatile three-week stretch when the stock market was bottoming on a short-term basis. In other words, we said, “It is often said that the stock market is one of the only places where investors don’t like bargains. When markets were going higher, everyone was lined up to buy last year at more elevated levels, only to then sell at depressed levels. It is also said during volatile periods like the present, money shifts from weak hands (retail investors) to strong hands (institutional investors). Buffet is one investor who has bucked the conventional approach of many investors and consistently has used weakness as an opportunity.” We are not saying that all big company insiders are nearly as good of investors as Warren Buffett, but we do know that company insiders have considerable knowledge of forward-looking revenue and earnings, the sector environment within which they operate and the current macroeconomic risks we face. Therefore, if they are buying up their own company’s stock, it does show that they are finally convinced this is a good time to buy. Typically, insider buying picks up and peaks near market bottoms, at least on a short- or intermediate-term basis. Sometimes they can be a little bit early, but it is a good sign nonetheless. This is the opposite to retail investors, who tend to sell at those times.

Corporate executives this month have bought shares in their companies at a rate not seen since the early days of the Covid-19 pandemic in what some Wall Street analysts said was an encouraging sign for the U.S. stock market at that time. Between the start of the month and May 24th, insider buying of S&P 500 companies and for the broader Russell 2000 index has been the strongest since March 2020, according to figures from VerityData (FT.com). 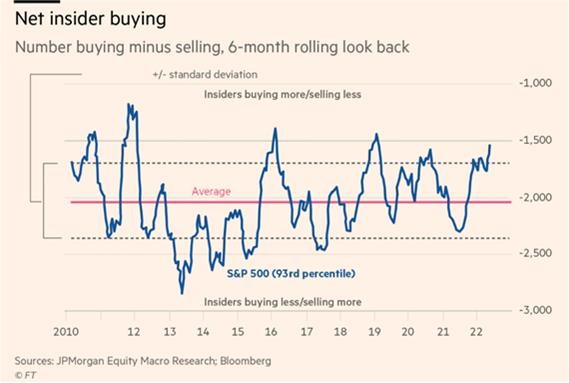 Here is a short-term chart from another source that shows the same thing - that May is the largest insider buying month in over two years. According to Bloomberg, Dave Lutz of JonesTrading Institutional Services reports that “the number of tech insiders who bought shares in May is on track to hit the highest level in at least two years, according to data compiled by the Washington Service, after purchases cratered the month before when the Nasdaq 100 Index suffered its biggest monthly drop in more than a decade.” 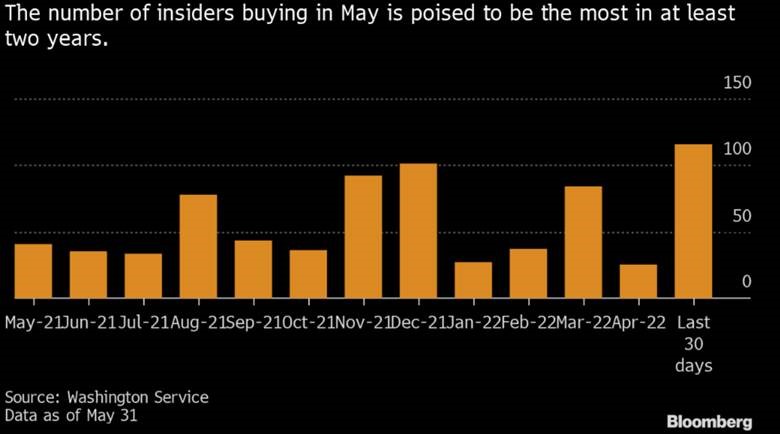 This is a solid indication that there is strong institutional support near current levels. We said the same thing in our comments on May 5th when we noted “This is likely one of the key reasons why we saw the rally off that early March low, with institutions stepping in at those levels. The rally has since pulled back, but these same institutions could view this same level as an area of opportunity, and as a result, support for the market. One of Buffet’s famous quotes is: ‘Be fearful when others are greedy. Be greedy when others are fearful.’” At the time we said that institutional buyers could view this same level (March lows) as an area of opportunity over the long-term. The market did pull back in May to slightly below those levels, but it is still encouraging to see a more than two-year high in insider buying this past May as a sign there is important support around there and perhaps it is a set up for a summer-time bounce.