Market Insights: Is Peak Inflation Behind Us?

Check out this video detailing some of the strangest and most amazing planets scientists have discovered.

We have discussed inflation and interest rates numerous times in the last couple months and its impact on the equity and bond markets this year. What we have stated more recently is that although we believe inflation will stay elevated for a significant period of time and will have negative impacts to growth, we likely have already seen the peak of the rate of change in inflation. The level of inflation versus the rate of change of inflation, is an important delineation to make when putting probabilities towards how it will impact markets going forward. Market prices and changes of those prices are a reflection of the collective mindset of all investors and what they are willing to pay for an expected level of growth and/or a future cash flow in the context of the current inflation and interest rate environment we are in. The market already knows that inflation is high and will be high for a while, but on a go forward basis, markets move more on the rate of change of that expectation, not the actual level itself.

The chart below shows the year-over-year change of the monthly core Personal Consumption Expenditures (PCE) price index. The core price index excludes food and energy and is less volatile. The PCE and core PCE are the preferred inflation measures used by the Federal Reserve in its monetary policy decisions. As you can see, the core PCE peaked in February at 5.3% and has since declined to 4.9%. The most recent measure for April was just released today and was in line with expectations. Importantly, this was the first back-to-back monthly decrease in year-over-year core inflation in two years, going back to April 2020. In addition, the PCE price index (which includes food and energy), also declined in April from a level of 6.6% to 6.3% for its first year-over-year monthly decline since November 2020. This is just one month, but we would venture to say it is important to note since it had not declined a single time for a year and a half. 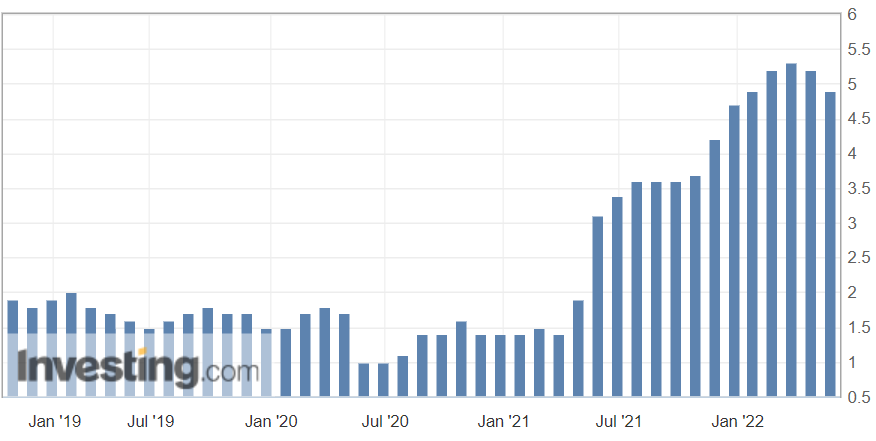 While politicians and consumers continue to fret about high inflation, and rightfully so in many cases, the data itself is starting to show that inflation may have peaked already. In other words, the bond markets themselves are starting to price downright modest long-term price increases and that a good portion of the current bout of high inflation is transitory. We can see how markets are pricing this in from something called inflation breakevens. This is the spread between real yields on the Treasury Inflation Protected Securities (TIPS) and nominal Treasury Bonds. The spread is an implied market price for inflation on a forward-looking basis as it measures the inflation compensation between the two markets. The chart below shows the 2-year, 5-year and 10-year inflation breakevens over the past five years. You will note that these rates have been coming down significantly the last two to three months. The difference between the nominal 2-year yield and the TIPS yield is currently 3.91%. What that means is that it is implying a market price of 3.91% inflation over the next two years (much lower than the current 4.9% rate we mentioned above). This yield approached 5% at its March 25th peak, so this rate has moved firmly lower since then, backing up our thought process that peak inflation is potentially behind us. Long-term breakevens have also come down a lot lately, with the 5-year inflation rate priced at 2.92% after peaking at 3.75%. This represents the average pricing of inflation over the next five years so it includes the 2-year rate. Lastly, the 10-year inflation is priced around 2.6% and has also been falling persistently. With inflation being closer to 2% pre-COVID, this means that we should get used to inflation consistently being about 0.5 - 0.75% higher going forward on a longer-term basis. We believe markets have mostly priced this impact into current prices, so if these breakevens do not consistently move back up again, there could be a good opportunity to put cash to work into certain risk assets with an intermediate to long-term time horizon. We will say it is important to note that TIPS breakevens at any maturity are not a general expectation, they are a money-weighted expectation combined with a liquidity premium. Therefore, both nominal and TIPS yields can go haywire during periods of stress, sometimes providing irrational numbers due to changes in liquidity (an issue back in 2008). So while these breakevens are important to watch, they still do require a grain of salt at times. 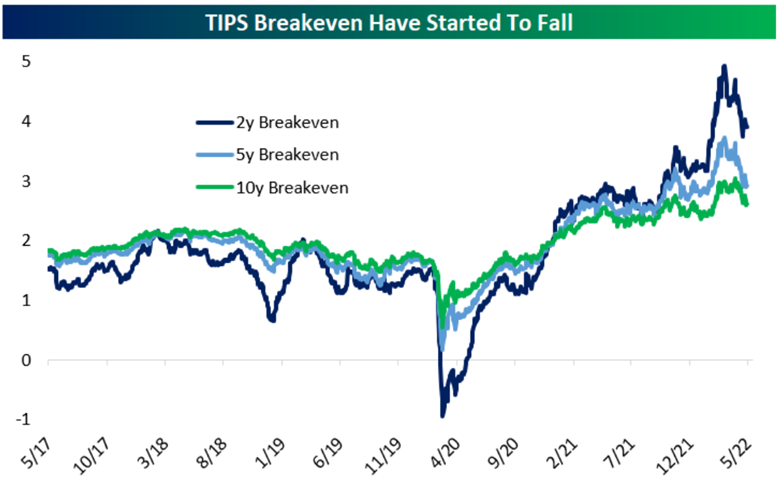