Here is a link to the most important video of the week: the highlights of Game 1 in the Flames v Oilers series.

This week’s first chart compares three past Fed Tightening Cycles to the current one, to get a sense of where we are right now. We’ve seen this stock market pattern before. The chart below shows the 1994, 2015-16, and 2018 Fed tightening cycles. A lot of sideways churn, with the occasional sharp drawdown like we just experienced, followed by an uptrend over the next few quarters. This may be a good roadmap that leads to at least an intermediate-term recovery of the past five months for U.S. markets and the past two months for Canadian markets. 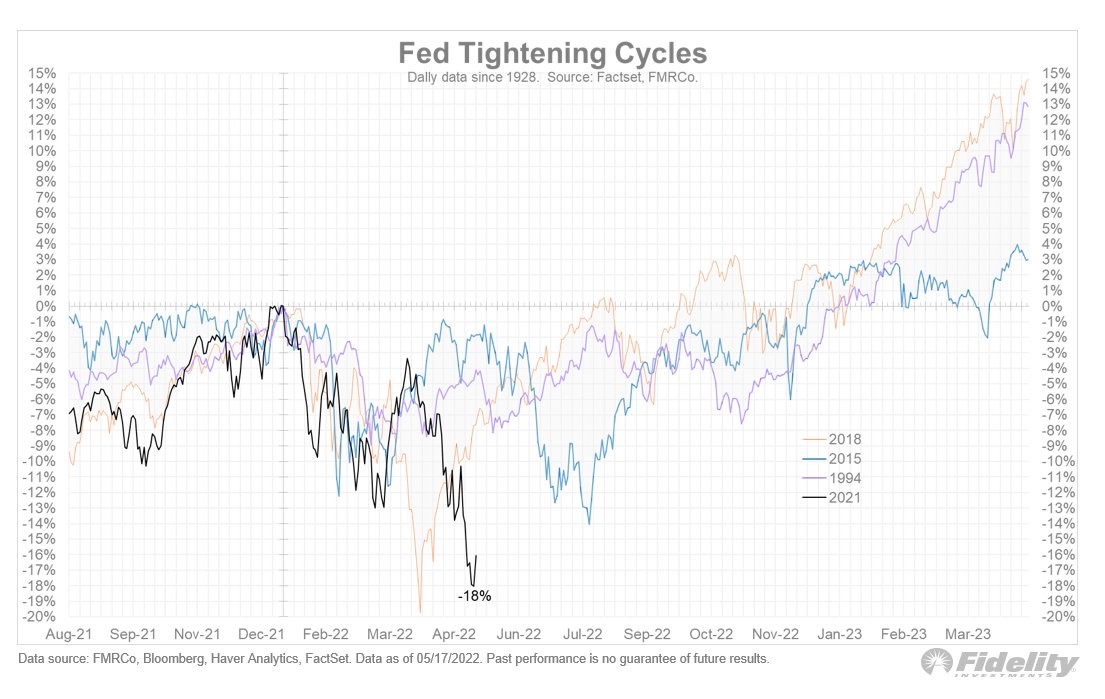 This week was another difficult one for equity markets, so we want to make a few general comments. The week started off strong but finished on a weaker note. The S&P/TSX Composite was finally able to end its six straight weeks of declines today, however the weekly negative string for the S&P 500 now stands at seven consecutive weeks. This has only occurred three prior times for the S&P 500 and not since 2001. In two of these three cases, markets continued down for one more week, however in all three cases, the markets recouped those losses in an intermediate-term oversold bounce, with two of them recouping more than those prior seven weeks of declines. With sentiment indicators at historically extreme levels of pessimism, and with current inflation and future Fed rate hikes likely mostly priced into markets, there is a good setup and likelihood for this bounce to occur soon.

Although we are not certain that this will be the low, we believe a low is possibly very near at hand, which could lead to a summer rally. If this occurs, it will be important to further assess the overall economic picture and real liquidity in markets at that time, to make further adjustments at better prices. The cash levels in our core mandates have been high the last many weeks, helping to offset some of the volatility we have seen. The low will likely occur when there is a change in the outlook for inflation, the inflation break-evens, and therefore monetary policy. We know that the US Fed is currently in a dilemma with their dual mandate of full unemployment (currently strong) and stable prices (not currently stable), and that the latter is something that likely won’t change in the very near-term until the current monetary policy turns from an overly “hawkish” tone to a more “dovish” stance. It will likely take an easing of this tone (perhaps partly due to the current market correction), and an easing of the annual rate of inflation (our leading indicators are showing this rate of change is peaking) before we see the long-term low. Our core mandates have sleeves of real assets and absolute returns, along with parts of our fixed income exposure, that have provided stability through this volatility. On the equity side, we continue to monitor and adjust portfolios, through our process, to having higher exposure to favourable sectors in this environment and continuing to own companies with high quality balance sheets.

We know that it is going to take patience through this process of markets finding long-term support, however it is good to remember the longer-term picture. Both of these statements are true: 1. Historically, the stock market’s general direction has been up (over 11%/year compound for the S&P 500 since 1980). 2. But during a given year, significant drawdowns do occur and have been common. We will end this week by showing a bar chart of the S&P 500’s calendar year returns and maximum intra-year drawdowns along the way. In 21 of the last 41 calendar years, more than half of the time, the S&P 500 has seen double-digit pullbacks within a year. In every year, there has been a market pullback and on average experienced a 13% decline. In the years when the S&P 500 did experience double-digit drawdowns like this year, 62% of the time the market ended the year with a positive return. In addition, in the past when the S&P 500 has had six or more weeks of consecutive declines totalling more than -10% (15 prior occurrences), over the following 1-year periods, the S&P 500 has returned 18.2% on average and a median return of 29.2%, with a positive success rate of 80%.