Check out this video of an impressive catch by dad.

Although equities had a strong day today, the S&P 500 closed down for the sixth straight week. This is a very rare event, one for which has historically provided very strong forward returns on average. It is important to keep a long-term view. When we look at the current environment we are in, where short-term interest rates are being raised by central banks (also known as a tightening cycle), let’s see where the S&P 500 Index is vs prior tightening cycles. The current market selloff we have seen is very much in line with historical norms following the first Fed rate hike. As shown below with the blue line being this year and the grey lines being past years, markets generally have found a bottom 1 - 2 months following the initial increase and are now very close to the lowest prior levels on the right side of the yellow dotted line. The good news is that generally markets have provided solid returns going forward for the next year after that point. 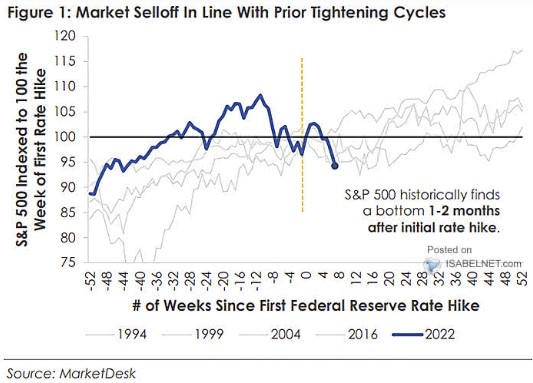 We have discussed historically negative sentiment, namely the bullish and bearish surveys of the American Association of Individual Investors (AAII) on more than one occasion over the past few weeks. This is one widely followed sentiment index and focuses on individual retail investors. However, there are two other widely followed industry sentiment indicators, one from Investor’s Intelligence (sentiment of advisors) and one from the National Association of Active Investment Managers (NAAIM). Fortunately, our source Bespoke Investment Group, has compiled the three sentiment indicators together into a Composite sentiment index to get a view of all three market participants in aggregate. Here is a chart of this Composite Net Bullish Sentiment over the last 15 years, and as you can see it has touched down to a level of just 35% which we have only seen a handful of times since 2006, all of which were periods surrounding either the great financial crisis or in late 2015/early 2016. The current level ranks below the 2nd percentile relative to all prior readings. 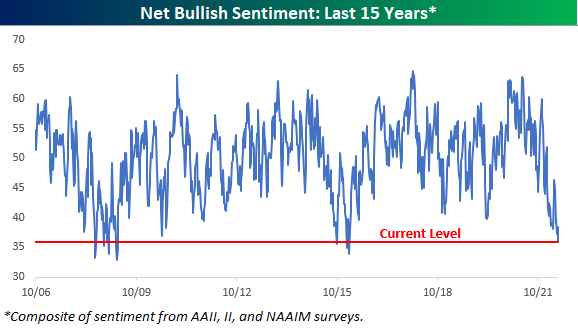 With overall economic growth still being relatively strong (albeit slowing), unemployment at a historically low level, U.S. household balance sheets and cash levels at formidable levels, interest rates still historically low (although rising), central banks still relatively accommodative overall, and credit stress levels still not overly elevated, we do not believe the current environment is anywhere near 2008/9. The positive news is that when you look at the following table showing all prior occurrences where the Composite Bullish Sentiment was at or below the 2nd percentile, the forward-looking returns were extremely strong, and this includes the two negative readings. On average, when this level was hit like today, the S&P 500 has returned on average almost 11% over the next six-month period and over 23% over the following year. 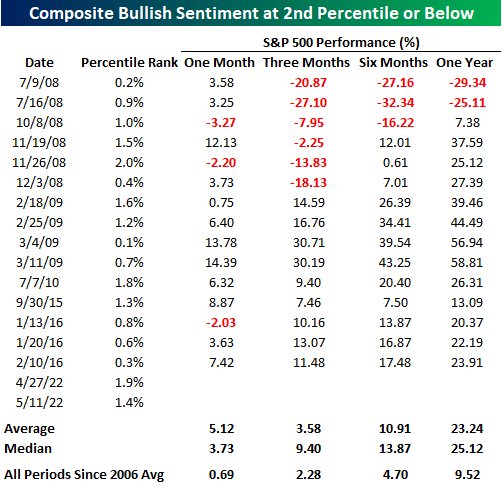