Check out this video of a heartwarming daddy/daughter gymnastics routine.

There certainly hasn’t been a shortage of so-called prognosticators in the media over the last few weeks looking through negative lenses, but the fact is the trend for economic growth and corporate earnings for the U.S. remains positive and strong. Despite some of the headwinds in developed Europe, Asia & Far East (EAFE) and Emerging Markets (EM) of late, you must be impressed to see that U.S. earnings are holding up very well in the face of everything we’ve seen this year. Here are the current 12-month consensus earnings per share estimates for the S&P 500 (blue line), as well as for EAFE and EM. 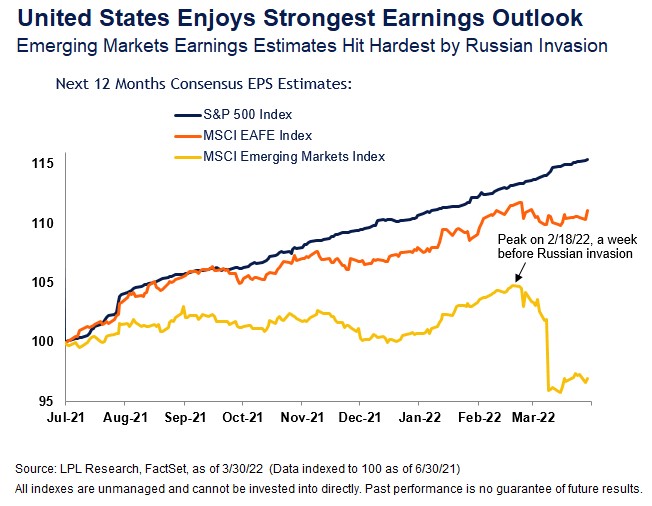 The chart above is as of March 31, 2022. However, over the past month analysts have revised earnings and revenue forecasts for the S&P 500 higher for the next four quarters of 2022, so the trend has not just been positive but accelerating. Please note one typo in the chart below, the first bars should say 1Q’22.

We continue to witness some incredible moves in long-term government bond yields in North America. In the last five weeks, we have witnessed the 10-year U.S. Treasury yield rise by almost 1% from 1.7% to 2.7% today. Bond markets are taking it on the chin as a result, with the FTSE Canada Bond Universe Index down more than 5% over that period and down well over 8% YTD. As you can see in the chart below, this is rare move in such a short period of time. In fact, this is only the 11th time we have seen this occur since 1990. We will note that the chart below was from a couple days ago when the increase was closer to 0.8% so the little red dot in the most recent instance is even higher right now.

The table below shows what has occurred in these prior 10 instances. While the prior five-week periods during these rate rises have been volatile, the following one-, three-, six- and twelve-month periods have been much more stable for equity markets. Median returns for the S&P 500 have actually been above average for all these forward-looking periods over these past occurrences, with positive returns in the 80-90% range. 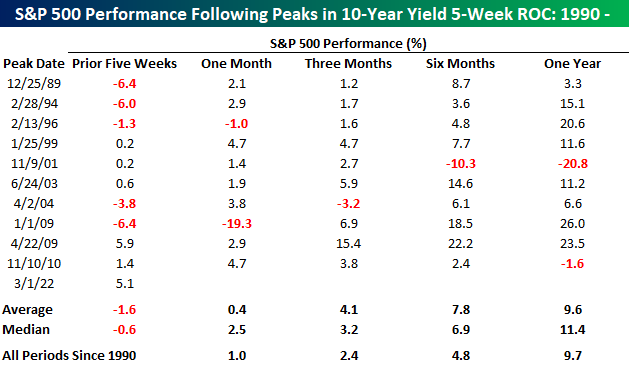 We wanted to end our comments this week on a lighter note. With golf season just around the corner, this weekend is the most prestigious golf tournament in the world, The Masters. It has sure been impressive to see Tiger Woods back in action looking for his sixth green jacket, after shocking the world this week with his incredible comeback from a very serious injury. The following chart shows how the S&P 500 Index has fared over a calendar year basis when various nationalities have won the Masters. This is clearly a random stat, and no investment should be based on this, but interesting nonetheless. Let’s all root for players from either Australia, Japan or Canada! 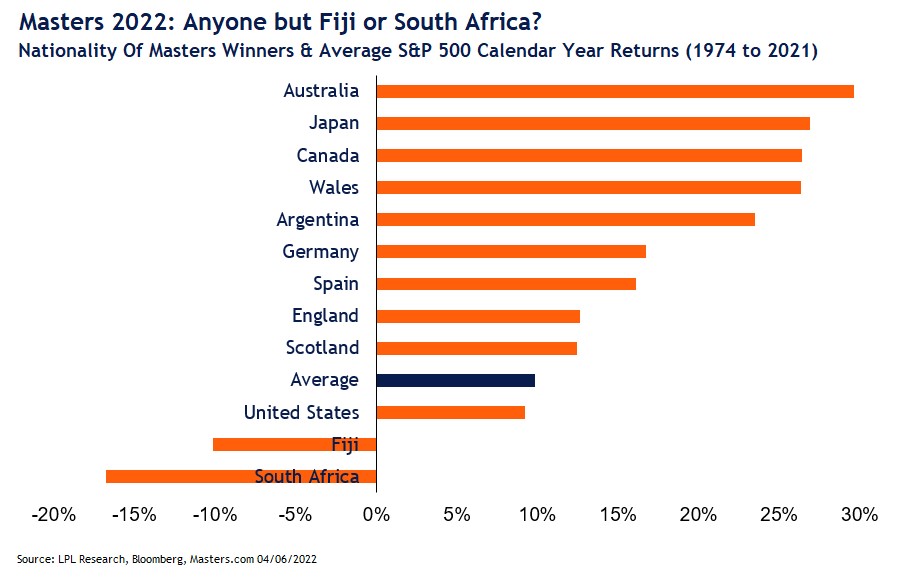