Check out this heartwarming video of a Michigan girl, who is completely blind, making a basketball shot during her high school game. This moment is better than anything that’s come out of NCAA March Madness!

Today may be April Fools’ Day, but there hasn’t typically been a lot trickery going on in April when it comes to the markets. Although April tends to bring in a lot of showers in terms of the weather, it has historically been one of the greener months of the year. As the following table shows, the Dow Jones Industrial Average in the U.S has gained an average of 1.46% over the last 100 years during April, with positive returns 62% of the time, ranking it as the third best month of the year behind only July and December. However, in the most recent two decades, April has gained an average of 2.21% with positive returns 85% of the time, easily making it the strongest month of the year. Let’s hope that positive track record continues for 2022. 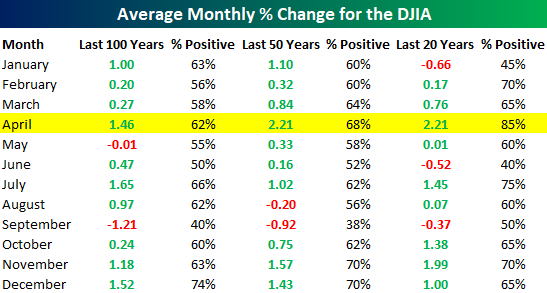 March turned out triggering a fairly rare signal when it comes to how markets performed. Looking at the S&P 500 Index, at one instance it was down more than 3% at its worst point, yet closed the month up over 3%. In addition, March closed below the all-time high monthly close and closed with trailing 12-month positive returns. In fact, this has only happened 10 times before for any month in the last 50 years! As illustrated from the table below, this occurrence in the past has resulted in very strong forward-looking returns, especially outside of the one negative result back in July 1973. The average and median 12-month forward returns have historically been 14.1% and 15.7%. Omitting the most distant occurrence in 1973, the average jumps up to 18.6%.

What may be prompting the situation? Our thought is that positive reversals in general, whether at an index or stock level, are usually very favourable as they indicate that markets found support and institutional buyers are stepping back in. That upward trend is exactly what just occurred in March. If we focus specifically on reversal months only, with just the two criteria above where the market was down more than 3% during the month but closed the month up over 3%, it expands the occurrences out to 24 prior instances. In this case, the average 12-month forward return has been even stronger, at 17.2% with positive returns 87.5% of the time. The only negative results were again in July 1973 and during the 2001-2002 recession. Those last two events are not included in the table above, unlike this March, due to the fact those did not occur when the month closed with a positive trailing 12-month return.