Many of us love to ski, but this is taking it to a whole new heights. Check out this new Sky Skying video of Red Bull Soul Flyer Fred Fugen push the limits of what’s possible. We got dizzy just watching it!

Markets were a bit more calm this week so we wanted to focus more on last week, when history was made. For only the 5th time ever, the S&P 500 Index gained at least 1% for 4 consecutive days. This rare occurrence has, in the past, proven to be a great time to be a buyer, as a year later it has been up more than 20% every single time with an average gain of 28%.

The green arrows below indicate exactly when these five signals occurred…

In addition to this positive sign, a couple major breadth thrusts occurred last week as well. Markets do tend to have relief rallies during corrections like the U.S. stock market is currently experiencing, but certain indicators such as breadth thrusts, which try to gauge the underlying strength/momentum of that rally and whether it is a trend change or not, are important to taken into consideration. One widely industry-followed breadth thrust indicator that we have discussed before is the Zweig Breadth Thrust Indicator. It is calculated by dividing the number of advancing issues on an exchange or index by the total number of issues (advancing + declining), and generating a 10-day moving average of this percentage. This indicator signals the start of a potential new bull market when an index moves from a level of below 40% (indicating an oversold market) to a level above 61.5% within any 10-day period.

Last Friday's rally pushed this indicator over the top when 90.5% of stocks closed above their 10-day moving averages. The chart below shows all the past instances with arrows, when this breadth thrust indicator was triggered. Since 1982, SPX has been higher 32 out of 34 times one year later with well above average results, with median and average performance of 14.5% and 16.1%. One could argue the next few month’s average performance has been even stronger illustrated in the table in the top left below. Past performance does not guarantee future results. 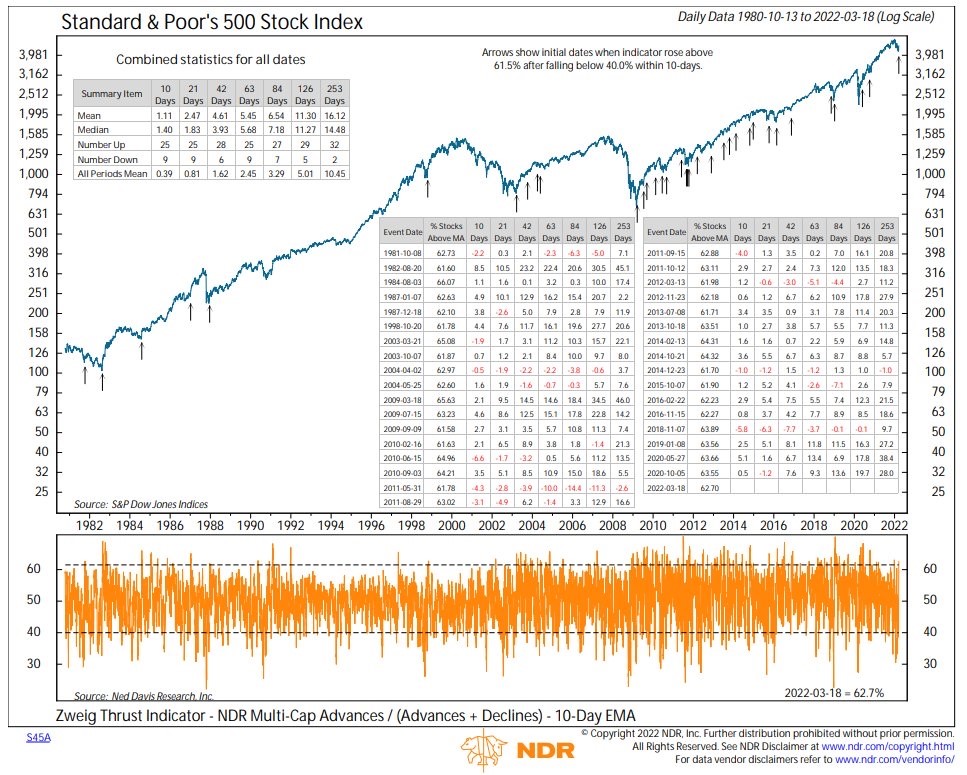