Check out this video explaining the Nord Stream 2 natural gas pipeline, which has now taken on much more political significance.

With both equities and fixed income having a difficult start to the year, it is noteworthy to show where there has been strength this year. This is clearly in physical commodities, specifically oil, which has been ripping up the charts of late as you can see below with the U.S. Oil Fund, which tracks the underlying commodity price. The other major commodity, gold, has also had a strong year so far as you can see from the SPDR Gold Shares Trust which also tracks the underlying commodity price. As of this afternoon, WTI Crude price is trading at more than 30% above its 50-day moving average, while the price of gold is about 7% above its 50-day moving average. These commodities are currently up 55% and 8% year-to-date respectively.

Why are we showing you both oil and gold? While it isn’t rare for one of these commodities to trade this overbought on their own, it is uncommon when both are this extended relative to their 50-day moving averages at the same time. Just how extended are we? If you look at the scatter plot below, of the more than 9,500 trading days since 1983, there have only been 33 occurrences where the prices of oil and gold were more than 20% and 5%, respectively, above their 50-day moving averages. That is just 0.34% of all trading days, and it would be even less if we looked at only those instances where oil was more than 30% above. We chose 20% above, as that is the price at which oil has traded at for the majority of this week.

If you look at the times when this has occurred, they have actually all been confined to five separate periods other than today going all the way back to 1983. There were a couple periods in the higher inflation times of 1986 and 1990, in the 2009 recovery after the 2008 Financial Crisis, and in 2016 after the 2014-15 commodity bear market. All these prior surges, except for 1990, came shortly after a large decline in prices. That is not the case today, which is more like August 1990 (when Iraq invaded Kuwait), when this is happening with crude oil prices hitting 52-week highs.

Lastly, let’s look at how the U.S. stock market has performed going forward after these prior occurrences. Here is the same chart for the S&P500 going back to 1983 showing the same red dots. For the most part, these instances happened toward the end rather than the beginning of equity market declines.

The following table summarizes the forward-looking returns for all three of these markets following the first day in each period where gold finished the day more than 5% above its 50-day moving average and WTI crude closed more than 20% above. There hasn’t been any clear trend for the price of gold, although shorter-term performance has been relatively weak. Turning to oil, even with it being more extended above its 50-day moving average than gold for each period, its forward-looking performance has been better. For the three, six and twelve months following, WTI has been higher 80% of the time with median gains in the 13-35% range. But what about equities which have been in a correction so far this year? Looking at the S&P 500 specifically, its past performance has been modest in the short-term, but improved significantly over six and twelve months, with positive results 80-100% of the time and median returns of 13% and 35% respectively which are exceptionally strong. It does make sense for the equity market to be accompanied by some short-term weakness as big moves higher in commodities often occur after a systemic shock that may cause some investors to sell risk assets. It often takes markets some time to settle down, but over time markets tend to find their footing and resume their general upward bias. Following the Russia invasion of Ukraine last week, there is no way to know if this time will play out in a similar pattern to these past occurrences, but at least the past evidence is encouraging for equity markets when looking at least six months out. 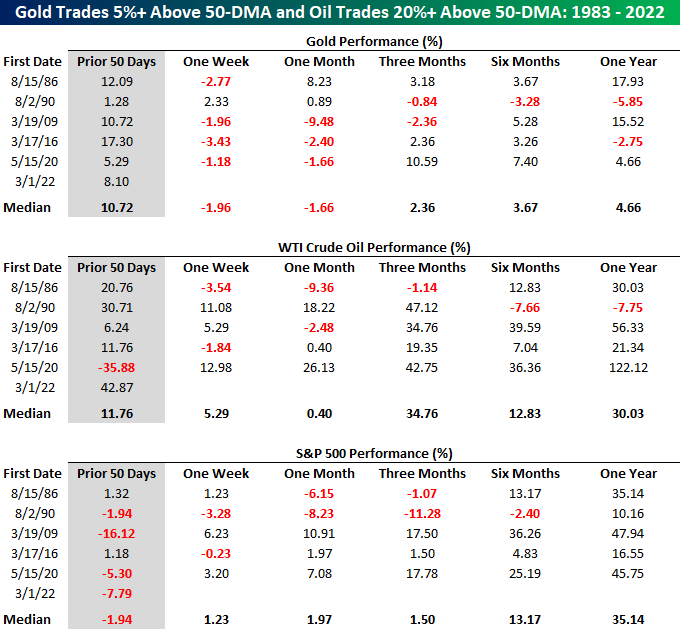