Check out this video of a four-year-old snowboarder narrating their own ride.

Today we saw the release of the University of Michigan Consumer Sentiment survey for February and preliminary results were not pretty. This is one of a few widely followed sentiment indicators for the United States. The reading came in at the weakest level since the last quarter of 2011 and not that far off the levels we saw that year or in late 2008 during the Great Recession. Before that, the only previous time lower than today was the Volcker-induced early 80s recession. This is a relatively extreme reading considering the fact that U.S. economic growth is actually currently strong, as opposed to 2008 and 2011 which were recessionary or near recessionary times. 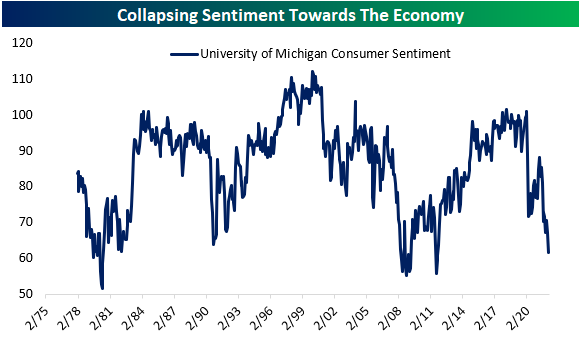 However, it is straightforward to understand why this reading is so low at the moment, and it solely has to do with inflation and inflation expectations. In the past, this headline consumer sentiment indicator has correlated strongly with the inverted combination of the unemployment level and the year-over-year inflation rate, often referred to as the Misery Index. Right now, the unemployment rate is very low at 4% and already at the Federal Reserve’s long-term target. The year-over-year inflation rate, on the other hand, is around 7% and at 40-year highs. So, although the unemployment rate is low which is a positive, it is the extreme current level of inflation that is pulling the light blue line down in the chart below, and thus likely this sentiment index as well. 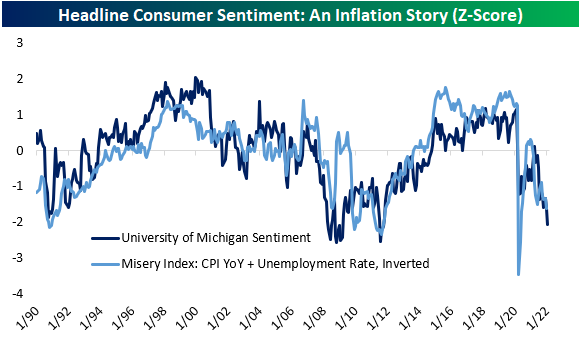 On a forward-looking basis (a sub-index of the above sentiment survey), consumers aren’t any happier. Again, what is interesting about this is the fact that normally this level of sentiment in the past has only been seen in recessionary or very poor economic periods, as opposed to the growth environment in which the U.S. is currently.

It is worth noting that most of the negative sentiment revolves around short-term inflation expectations, not long-term expectations. Although the latter has certainly picked up as of late, it is much more muted than the short-term, and just getting back to the levels they were for 20 years prior to the post-financial crisis expansion. We do not expect the light blue line below to stay at this level, it will likely gradually drop back down towards the 3% level as the year progresses. One positive from this is that we have yet to see a surge in long-term inflation expectations. 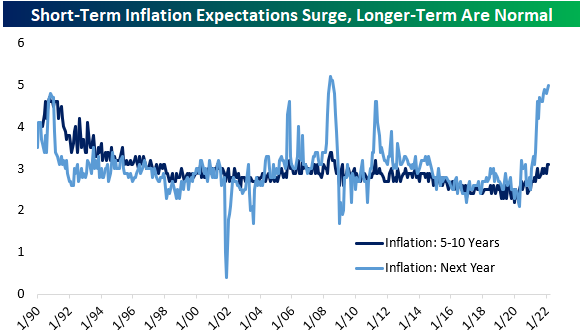 We continue to expect above trend economic and earnings growth this year. This in combination with low levels of credit stress and still relatively accommodative central banks, albeit with much higher levels of volatility than last year, should provide good entry points this year within the long-term secular bull market.