Check out this video of babies riding Roombas.

There is always a lot of chatter after January in the investment community about an indicator called the ‘January Barometer’, especially when the month is down month like it was this year. There is an old saying ‘so goes January, so goes the rest of the year’ that essentially means if January has a negative return, the rest of the year will not be a fruitful one for equities. While it may be true that a weak January can result in a full year’s return being lower on average than years with a strong January, simply abandoning the market based on this indicator has been an extremely poor move, most notably outside a recession which we are currently not in, and especially of late. If we look at the last 20 years, one could say that perhaps the January Barometer is broken? As you can see in the table below, of the past 10 times that the S&P 500 was down in January, the final 11 months were positive nine of those times and were exceptionally strong. In fact, if we remove 2008 (which was a recession year that we view as an extremely low probability event this year), the average return on the other nine years over the final 11 months was over 18% and positive 100% of the time. 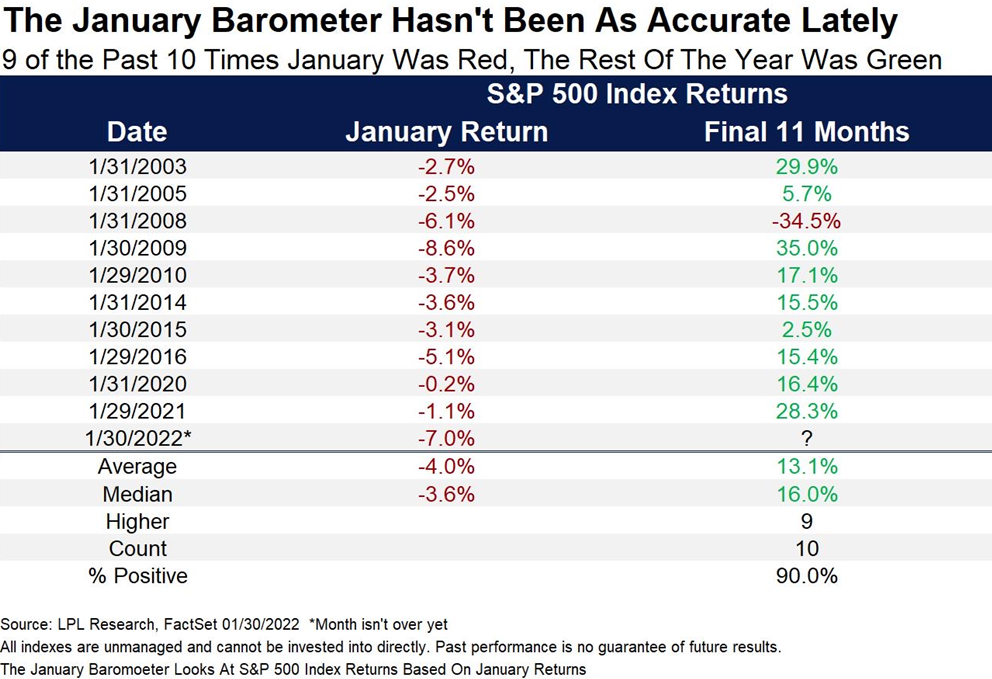 Corrections are a normal and healthy part of markets, and this time is likely no different. The important thing to remember is that time in the market is more important than timing the market, and the following chart illustrates how little corrections affect the long-term positive trend and how little impact short-term timing can have. With the S&P 500 officially moving into correction territory (over 10% drop) last week for the first time in a while, the below table shows how the market since 1928 has performed over the following 1-year and 5-year periods after this event. It essentially shows how the S&P 500 has performed if someone bought the index every time it first closed in correction territory versus buying it on any given day throughout history. Clearly, buying after a 10% correction is optimal in the short-term (1 year), but that timing has essentially no effect on the long-term median return. This is a helpful reminder that while corrections can be unnerving in the present, they are common, and they are certainly no reason to give up on equities for the long-term. 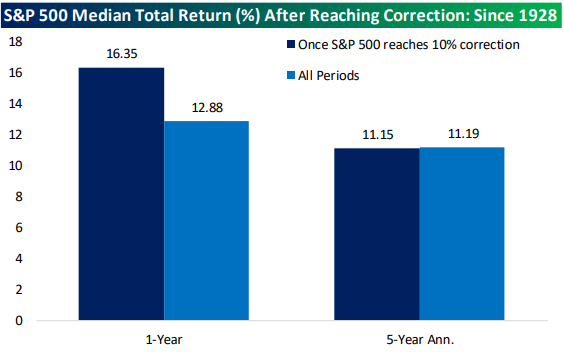