Check out this video of raining lizards in Florida.

The first four weeks to start 2022 has been a volatile period, especially in growth sectors like Technology, which has undergone a substantial valuation re-pricing, due to a recent spike in long-term interest rates, and more clear communication from the U.S. Federal Reserve about reducing their balance sheet and upcoming rate hikes. However, with overall markets in correction territory (-10%), and some sectors like Technology just shy of bear market territory (-20%), investor sentiment has now hit historically bearish extreme levels. Although some larger cap tech names helped keep the NASDAQ out of a bear market so far, there are over 40% of the companies in the NASDAQ that are down over 50% from their highs. In the past outside of a recession, which we are currently not in or projecting any time soon, these levels have closely preceded well above average forward-looking returns for equity markets. Even though economic growth and corporate earnings growth are decelerating, albeit from very high levels, they are both still historically strong. In addition, credit markets are very strong and showing little sign of stress and this combination signals low recession risk for the U.S. this year. Yesterday, U.S. GDP growth was revised upwards to a 6.9% annualized rate in the fourth quarter (originally announced at 5.7%), and in addition, U.S. Personal Consumption Expenditures was revised up from 3.0% to 3.5%.

Before looking more closely at investor sentiment, we will note that Monday this week saw a near record daily dollar trade volume in the U.S., which tells us that an intermediate-term bottom may not be far off from here, as it shows that retail investors (weaker hands) are selling aggressively, while institutional investors (stronger hands) are starting to buy around those lows. You can see in the following chart that only February 28, 2020, had a higher volume. That type of panic selling by retail investors normally occurs within striking distance of market lows. This should provide some much-needed support for the markets around the same levels of the September/October 2021 lows for the S&P 500 and the March/May 2021 lows for the NASDAQ. 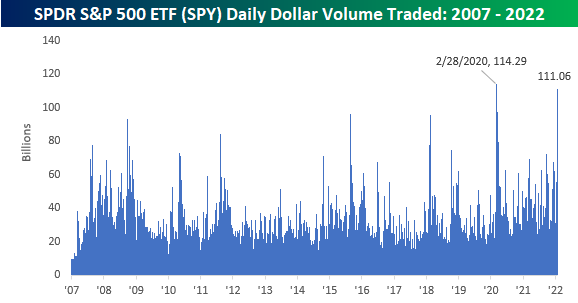 This past week we saw extreme bearish sentiment as published by the widely followed American Association of Individual Investors (AAII). The AAII Bearish Sentiment indicator came in at almost 52.9%, which is the highest level since the week of April 11, 2013. Of note, that is even more bearish than the March 2020 COVID low. On the hand, although coming slightly off its low from the prior week, the AAII Bullish Sentiment came in at just 23.1%. The spread between these two, known as the AAII Bull-Bear Spread hit a low this week of just 29.8%. Again, that is the lowest level since April 2013. 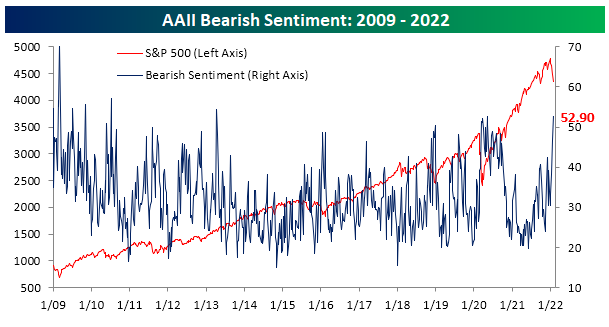 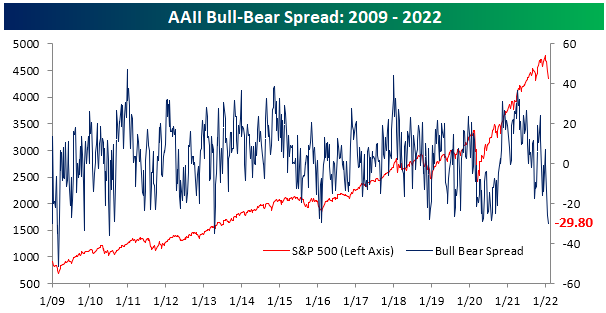 What have forward-looking returns looked like in past occurrences such as this? The following table shows the average performance of the S&P 500 when this AAII Bearish Sentiment level crosses above 50% for the first time in at least three months. The present instance is the first time since March 12, 2020, which was seven trading days before the COVID crash low, which in hindsight was one of the best entry points to invest in history. For the 16 prior times, the next week has been weaker than normal, but the longer-term returns have been very strong with well above average returns and with gains well over 80% of the time six to twelve months out. The only negative outlier here is 2007 which in hindsight preceded the worst recession in 75 years, which is certainly not even remotely the case at present. 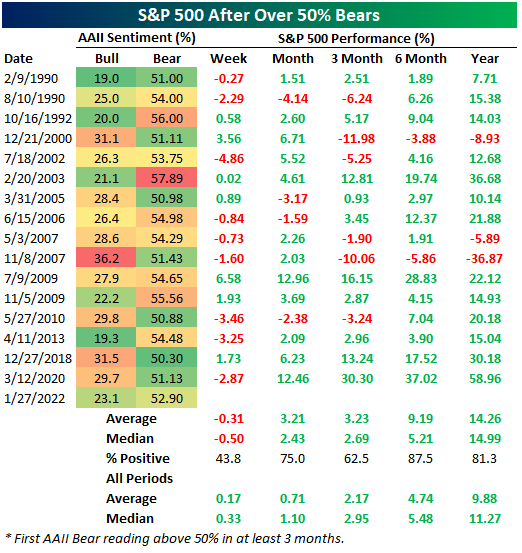 This was not the only source indicating extreme levels of pessimism by market participants. The Investors Intelligence survey of newsletters saw its most bearish readings since the spring of 2020. Also, the NAAIM Exposure Index, which is the National Association of Active Investment Managers, hit ones of its most modest readings in the last year. Putting them all together into a Composite Score by Bespoke Investment Group, you can see this has fallen below the -1 level, meaning average sentiment indicators are a full standard deviation below (in a bearish direction) their normal reading. This is the first time this has occurred since the COVID crash low. 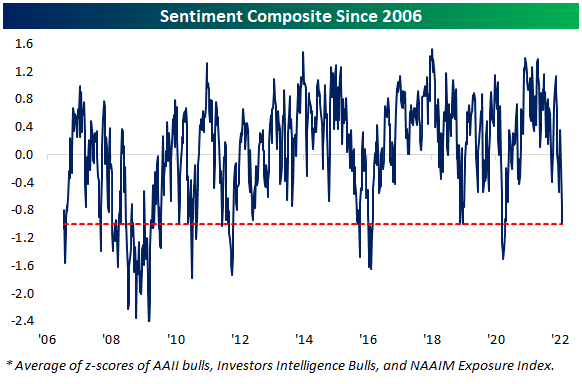 The following table shows all the past occurrences where this Sentiment Composite falls below -1 for the first time in at least three months. Although the one-week period following these instances in the past has led to weak results, the longer-term numbers are extremely strong, with average forwards returns over the next six months approximately double that of all periods. Again, the only standout negative period was in the 2008 period, which as stated above was during the worst recession in 75 years, an environment we are not remotely similar to. 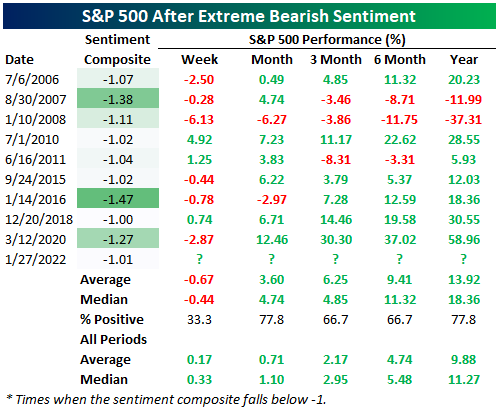