Check out this video of a Canadian Olympic gold medalist hitting the streets.

Equity markets are off to a rocky start, however perhaps it isn’t completely unexpected that markets are taking a breather after such a strong year in 2021. Adding to that, bond markets haven’t fared any better, with the Canadian aggregate bond index down more year-to-date than it was down all last year. In other words, what is normally considered a safe haven during corrections has not been this time.

Mid-term election years are known for being a bit more volatile than others, and this year is living up to that reputation so far. In the post-WWII period, the S&P 500’s average return during mid-term election years has been about half of what it typically is for non-mid-term years, approximately 5% vs 10%. Perhaps expectations should be tempered a bit this year. That being said, overall economic growth and earnings growth is still shaping up to be strong this year, so perhaps a higher base level of growth could prove to make this mid-election year better than average. Here is a chart of the U.S. market’s average mid-term year performance compared to all years and all other years. In looking at the red line in the chart, typically the year starts off weak and then strengthens into the spring, before pausing again in the summer and leading to a big rally in the third quarter. There is certainly no way to know if this pattern will play out again this year, but it is always good to know past patterns for at least a rough guide. 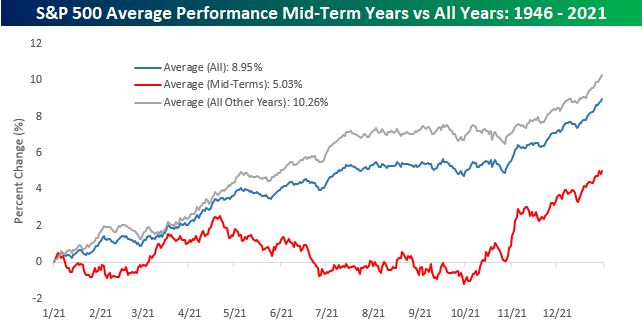 In addition to the above weakness compared to other years, mid-term election years tend to have a lower rate of positive returns as well. The biggest strength in these years tends to be in March compared to all other years, so we will see if that plays out this year. It certainly could prove to be true, especially with the bar being fairly low right now after a weak start to the year. Although mid-term years have been weaker on average, the percent of time positive is still close to 60%. This year, we would likely lean towards that positive rate being higher than that, given the still strong economic backdrop and earnings growth, relatively low stressed credit markets, and very low real rates of interest.