Market Insights: Trend and Breadth Are Your Friends

Check out this video of ET Canada’s tribute to Betty White.

Happy new year to all and welcome back to our Charts of the Week. We wanted to start 2022 with a recap of the main headlines of 2021 illustrated on both an equity and bond market time chart, with events that occurred along the way and what potentially drove markets. As with any year, markets swing but despite all the negative news, the S&P 500 (and the S&P/TSX Composite for that matter) had one of its best years. This data provides another reason to focus more on the longer-term trend and fundamentals as opposed to the daily grind of media and forecasts. On the other hand, it was a difficult year for bonds, particularly longer-dated government, and investment grade corporate bonds. The 10-year US treasury yield rose from 0.92% to 1.51% (and has since jumped to 1.77% as of today), while the Canadian 10-year government bond yield increased even more from 0.68% to 1.43% (and now 1.72% today). As a reminder, all else being equal, when long-term interest rates rise, the price of an existing bond declines. Coming into 2020, our highest conviction view was that long-term yields would rise, which worked out well with most of our core mandates returning 10% or more in the fixed income space. The FTSE Canada Universe Bond Index, however, declined 2.54%, along with the vast majority of the largest bond funds in Canada controlling tens of billions of dollars. Although it is still very early in the year, the trend has continued, and it would not surprise us to see yields push closer to 2% at some point in 2022. 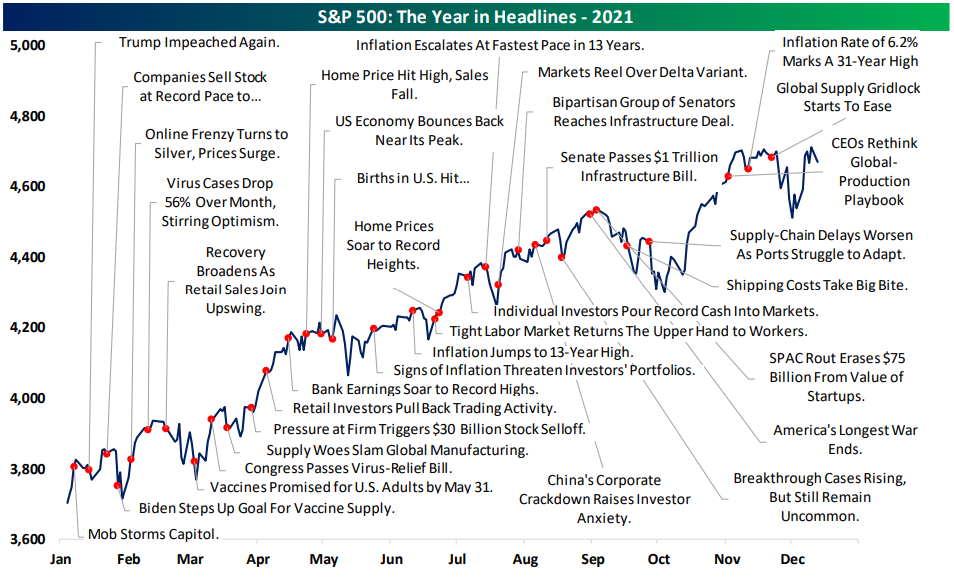 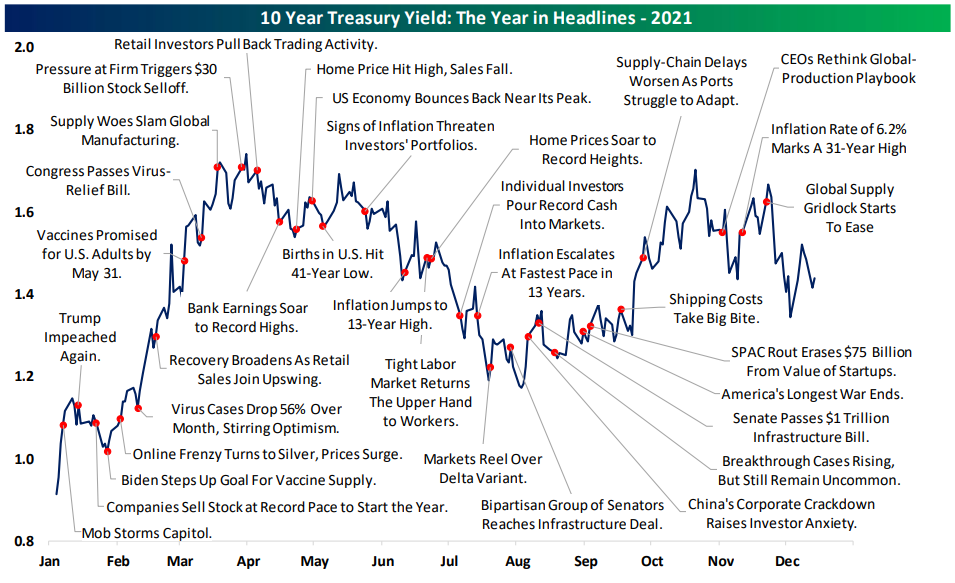 Turning to this week’s subject, there is one internal metric of late that has been running very hot: breadth. For those unfamiliar with the term breadth as it relates to the markets, it refers to the relative change of advancing to declining securities. Breadth indicators can be useful tools to forewarn of reversals and uncover strength or weakness in the movements of an index that are not visible simply by looking at a chart of the index. As of early this week, many equity sectors’ current breadth readings, including consumer staples & discretionary, industrials and materials, are through the roof. We have witnessed huge moves over the past couple of weeks resulting in those sectors hitting 99th percentile readings (top 1% since 1990), including the overall S&P 500 Index.

Typically, strong breadth readings have been followed by consistently strong broad market returns. We often see some short-term weakness as one might expect, but broadly speaking, it has usually been a sign of strong forward-looking longer-term results. The following chart shows the 10-day Advance-Decline Line since 1990. On Tuesday, it crested the highest level since mid-2020. 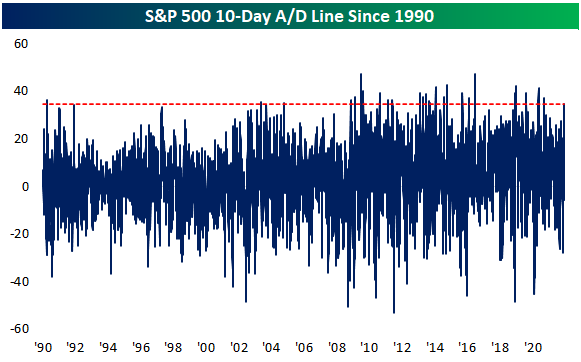 When examining the average readings across all sectors, as of earlier this week the reading stood at the 94th percentile, which is at the higher end of occurrences when the overall S&P 500 is in the 99th percentile. Higher readings have arisen in past times, namely 2009, 2011 and 2016 when six sectors were in the top 1%, although the current readings are still very high. As mentioned above, strong breadth is typically considered to be a positive sign as it indicates there is robust market participation as opposed to just few big names (like Apple or Microsoft for example) pulling everything along. An overall view of the past market trends when we’ve seen a 99th percentile S&P 500 advance-decline line reading for the first time in 3 months in the table below, notice that over the very short term (one week), markets have only fared above about average. However, the following 1- to 12-month period has demonstrated a much more consistent pattern to the upside and stronger than the norm. This tendency is especially true over the next 6 and 12 months, where these past instances have resulted in returns that are 40-60% above average compared to all other periods, with a 100% positive return rate over the following year. This historical data certainly does not predict a certainty of what 2022 will produce, but it is still encouraging to see strong breadth measures when equity markets hit new highs, especially within the context of the current secular bull market. 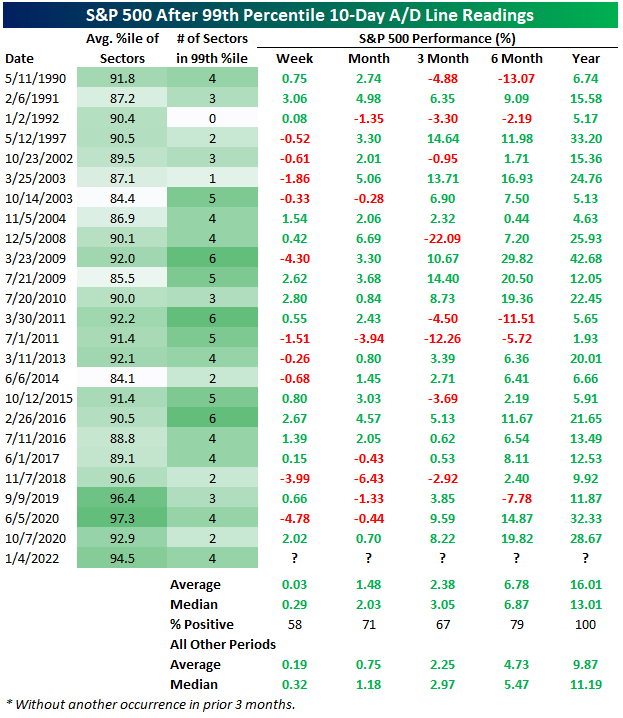