Check out this video of Westjet’s Christmas video this year.

Inflation has been a hot topic in 2021. With the highly anticipated release of the November Consumer Price Index on Friday, coming in at 6.8% year over year, inflation seems to be running even hotter as the year progresses. In fact, as illustrated in  this chart, inflation in the U.S. is running at its highest pace since the early 1980s. 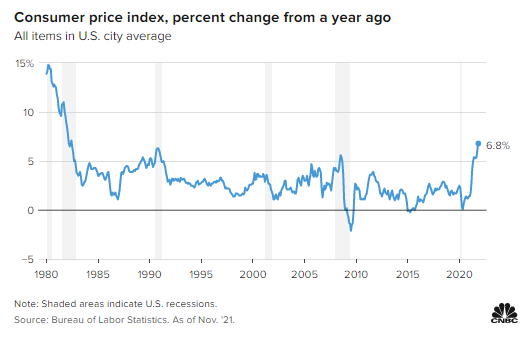 The causes of the recent spike in inflation fall into two main groups: ongoing supply chain disruptions and a massive increase in the money supply. Supply chain disruptions are reported almost daily now, due in part to events such as COVID outbreaks shutting down factories in Asia, the week-long blockage of the Suez Canal earlier this year, and a bottleneck of almost 100 container ships parked offshore at ports in California that can’t unload. The increase in money supply isn’t specifically discussed as often in mainstream media, but this increase is a result of massive Quantitative Easing by the central bank, the U.S. Federal Reserve. With the creation of literally trillions of new dollars, that money finds its way into the financial system. The presence of more dollars chasing the same (or less) amount of goods, the unsurprising result is an increase in prices.

The ongoing question of course is: will this last? Some experts believe inflation is here to stay while others argue this inflation is temporary. Only time will tell, but the world should know the answer in the next year or two. If inflation doesn’t come down to the Fed’s 2% long-term target rate in that time, it will be apparent that inflation has been much more persistent. In that case, the U.S. Fed, along with other central banks including the Bank of Canada, will have to act decisively to reduce or eliminate the excess stimulus that was brought in after the onset of the pandemic, including the end of Quantitative Easing and the end of ultra-low interest rates.