Check out this video of a cute 11 month old girl snowboarding in China.

Equity markets have displayed a little ping pong action lately, with some wild swings in either direction, at least relative to most of this year, outside of September’s correction, which has been relatively stable. The CBOE Market Volatility Index (also known as the VIX) has skyrocketed from a relatively calm reading in the 15-20 range to reach as high as 32.6 yesterday. Readings under 20 are generally considered periods of low volatility whereas periods over 20 are considered elevated volatility. Readings over 30 are periods of extreme volatility. The S&P/TSX Composite specifically has experienced a rough patch of late, down almost 5.3% as of the close of the markets today, from its all-time high in mid-November. In fact, it was down as much as 6.1% from that high at one point this week, taking it back to levels first achieved in early August. Although the TSX finished the month of November down 1.62%, accounting for its second worst month this year behind September, it is still up over 20% YTD including dividends, and thus, contextually speaking, still produces the longer-term positive trend.

With November behind us, perhaps we can look forward to a more positive set up coming into the New Year. A well-known market seasonal phenomenon called the Santa Claus Rally may generate an increase more than what is considered average/normal during the last week of December and first couple days of January. About two thirds of Decembers dating back to 1960 have led to positive results for investors. One potential explanation for this short-term positive seasonal trend is this Santa Rally. According to the Stock Trader’s Almanac, 39 of the last 50 holiday seasons, which consists of the last five trading days of the year and first two after New Year’s, have been positive, or 76% of the time. The average cumulative return over these days is 1.4%; certainly way above normal.

We sure started off December on the wrong foot with markets down significantly, most down more than 1%. However, let’s not give up on Santa just yet. Consider how the S&P 500 has performed in past Decembers when markets have been up over 20% through November, as is the case this year. As the following table illustrates, the final month of the year has been stronger than normal in those past 15 instances going back to 1950 for an average return of 1.7% versus 1.5% for all years. In fact, the S&P500 index has been higher in eight of the past nine times as well, for an average gain of 2.2%. Let’s hope Santa is good to us this year as well. 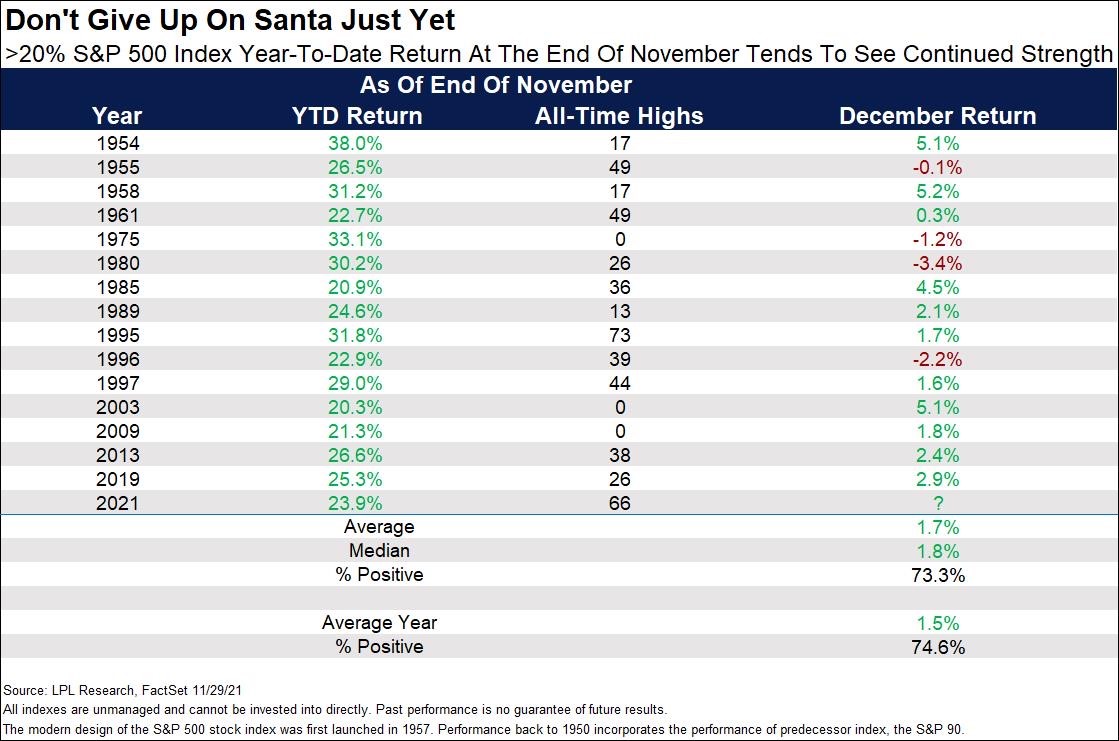 Lastly, examine how December has fared in the past after a poor November for the S&P 500 Index. It fell 0.62% last month. One may think that disappointing numbers - for what has historically been a strong month - is a negative indication for what is to come for December. However, the data simply doesn’t support that when considering how well markets have done on a year-to-date basis. For the S&P 500, this marks the 10th time in its history where the index was down in November after being up more than 10% on a year-to-date basis. The table pictured below lists those past 10 occurrences and how December has consequently performed. Please note, there is a typo on this table; it should be titled 2021 and not 2011 for the most recent year. Notice how December has exhibited growth in 100% of those times for an average gain of 4.3%. That result is drastically above the average return for December, in fact, a shockingly almost three times higher than normal. The last time this expansion happened, 30 years ago, December had a wild 11.2% gain. The last time this situation occurred, with the index up over 20% YTD as it is this year, was way back in 1938 and December still returned 3.2%. 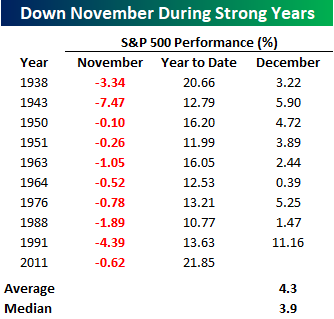