Market Insights: Does the Tech Sector Struggle in a Rising Yield Environment?

Check out this video of a California freeway grinding to a halt after money accidentally fell from an armored truck.

We see many comments suggesting that the technology sector, which most view as a growth sector, will not perform well in an environment where interest rates are rising. We especially see these headlines make the rounds when tech stocks come under pressure like we saw earlier this week, with the old argument that tech can’t rally in a rising rate environment because it puts pressure on the stock’s price/earnings multiple. Perhaps this subjective view is one looked at in isolation, but one must consider the entirety of other forces that drive asset prices (primarily growth and inflation). However, upon observation of the data, the facts simply don’t back that up. Examine the post-financial crisis period (last 11 years); the tech sector has actually performed better when interest rates are rising versus falling. This trend may seem counterintuitive, but we have the tech sector as one of the top sectors to hold in a reflation environment (growth accelerating, inflation accelerating) which we are currently in. The other sectors that tend to be the strongest in this environment (what we refer to as Quad 2) are consumer discretionary, industrials, energy, and financials.

To begin, we need to define what we view as a rising or falling rate environment. We consider this as a 20% or more increase (or decrease) in the 10-year US Treasury yield without a 20% decline (increase) in its yield in between. With that definition in place, we can count 15 periods of rising rates, and 15 periods of falling rates since 2010 for a solid comparison. Pictured below is a chart that shows the median performance of the US technology sector vs. the overall S&P 500 during periods of rising and falling inflation over the last 11 years. Notice the tech sector has outperformed the overall market by a median amount of 0.4% when rates are rising and has had positive returns in all 15 periods as opposed to 14/15 for the overall market. On the other hand, the tech sector has underperformed the overall market by a median 0.8% when rates are falling and has been positive 9 out of the 15 periods vs. 10 for the overall market. What may be glaring from this chart is what one may not expect; the market in general has actually performed better in rising rate periods as opposed to falling. 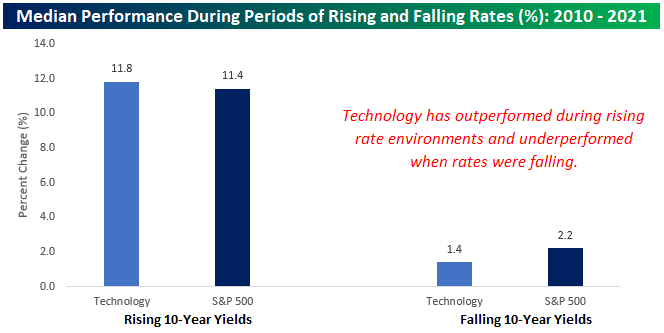 Next are the charts that show a more detailed picture with all 15 periods of rising and falling rates. The evidence is very clear, since the Great Recession markets have performed better in general in rising rate environments than falling. In rising rate periods, it is worth noting that the technology sector has outperformed the S&P 500 11 of out of the 15 times, while in falling rate periods, although much less uniform, the tech sector has outperformed the S&P 500 only 9 out of the 15 time. The final conclusion from this data is that the tech sector remains a strong component of the market and has outperformed the overall S&P 500 on both an absolute and relative basis when interest rates are rising versus falling. 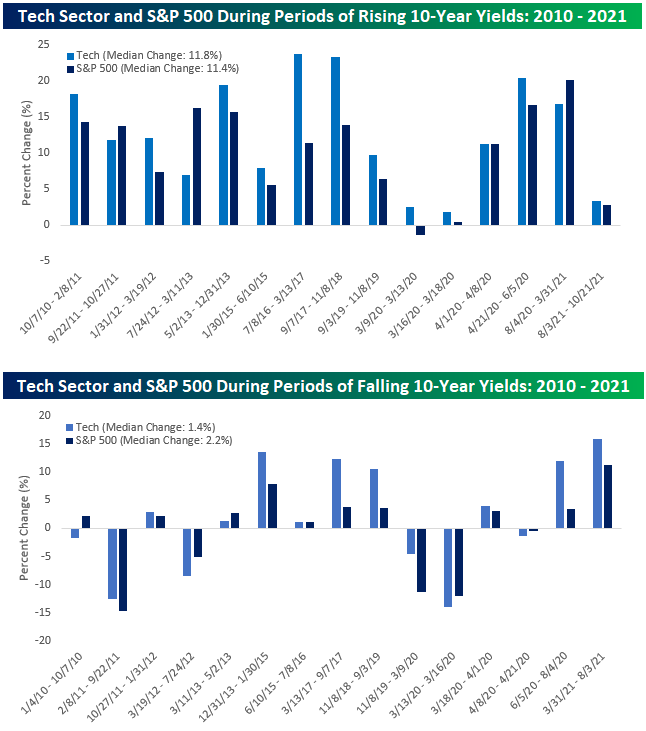