Macroeconomic and Market Developments: North American markets were mixed this week. In Canada, the S&P/TSX Composite Index was up 1.44%. In the U.S., the Dow Jones Industrial Average declined 0.63% and the S&P 500 Index also down 0.30%. The Canadian

Check out this video of someone racing the London Underground from one station to the next.

At the end of last week, the S&P 500 Index, NASDAQ Composite, Dow Jones Industrial Average and Russell 2000 Index all closed two standard deviations above their 50-day moving averages. When this upswing occurs, one might expect that markets are in for a pause or consolidation, or perhaps even a correction if this overbought condition has been in place for a significant period. However, we will note that when an extreme overbought condition occurs for the first in a long time, the picture is quite different, at least historically speaking. This past week was actually the first time in 455 consecutive trading days going back to January 2020 without all four major indices in an extreme overbought position. In the past, and this is by no way a certainty of future results, when each index exhibiting extreme overbought levels coincide for the first time in at least a full calendar year, they all tended to see better than average returns going forward.

Let’s first examine a 40+ year chart showing all past instances where periods of over a year without the indices being in an extreme overbought position ended. Notice, there have only been a handful of periods where all four indices extended well beyond the one-year mark without all four simultaneously closing at extreme overbought levels. The most recent was back in December 2016 when it ended after 741 trading days, the second longest such streak on record. Only the June 2003 streak of nearly 1000 trading days surpassed that level; this marathon was the stretch of time coming out of the Dot Com Crash and just after the second Gulf War. 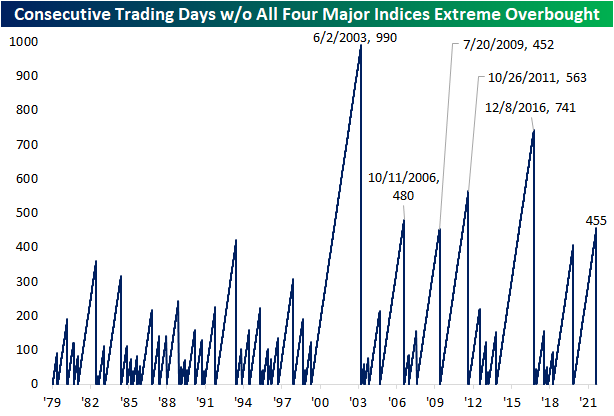 Now let’s review how the S&P 500 Index has performed historically having been well over a year since the last time all four major US indices were extremely overbought in unison with each other. There have been ten prior occurrences in all, and as indicated by the infographic, forward returns have consistently been higher with gains much larger than normal for all periods. In fact, over the 3-month, 6-month and 1-year periods, returns have been 50-75% greater than average. Of course, there are a few red numbers, but the vast majority of the time the numbers are strongly green. This illustration is not a large sample size and doesn’t reflect what will occur this time, but it does indeed show that when observing an overbought condition in isolation, it is important to consider if this is a new condition or something that has been in place for a while. Today, this condition is new, and thus hopefully bodes well going forward. Perhaps it signifies a new and growing underlying positive breadth to the market. We are not showing the other three major indices below, but we can say that returns have generally been similar for those as well with positive returns most of the time. The conclusion of the table’s data is that the end of prior droughts without all major indices being extremely overbought have been followed by consistently stronger returns, rather than a reversal lower. 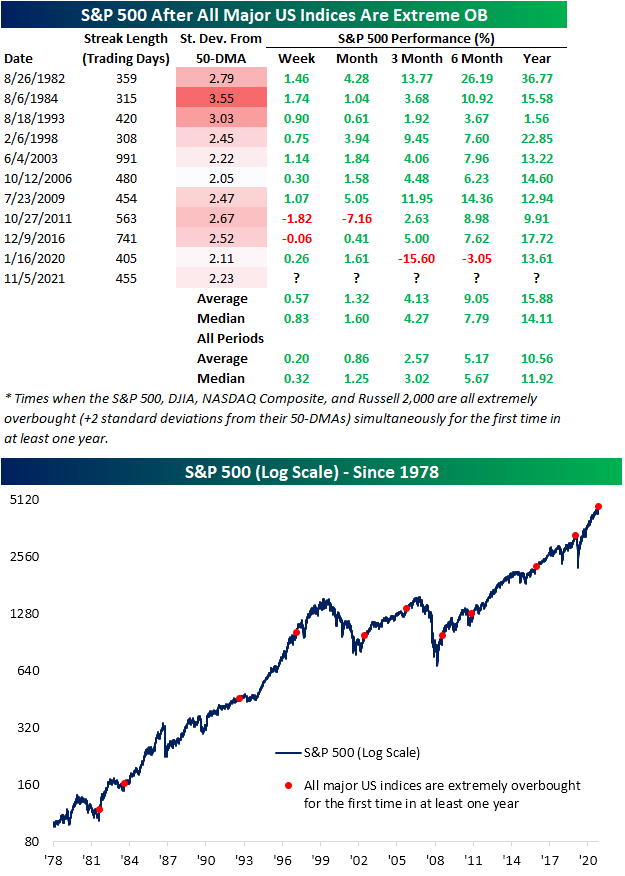