Macroeconomic and Market Developments: North American markets were mixed this week. In Canada, the S&P/TSX Composite Index was down 0.78%. In the U.S., the Dow Jones Industrial Average was up 0.40% and the S&P 500 Index increased 1.32%. The Canadian

Check out this video of a dog accepting full responsibility for their actions (make sure to turn up the volume).

In light of All Hallows’ Eve, also known as All Saints’ Eve, arriving this weekend, we thought we would share a little lessor known market ‘phenomena’ called the Halloween Trade. We have a solid knowledge of seasonal patterns, as well as markets signals like the ‘Santa Claus Rally’ and the January Barometer (“so goes January, so goes the rest of the year”), as well as a plethora of others; however, we must admit we didn’t know much about this ‘Halloween Trade’ until we came across it courtesy of Jeff Hirsch, Editor of the Stock Trader’s Almanac. The following chart shows how the S&P 500 has performed in the last four trading days of October and first three trading days of November, and the data shows this period has a very positive track record. In the last 27 years, the market has only been down four times during this seven-day stretch. That is an 85%-win rate for an average gain of 2.08% and medium gain of 1.5%, far above the norm for seven-day periods. This trend extends to other markets as well like the Dow Jones Industrial Average (blue chip large caps), the NASDAQ (technology) and the Russell 2000 Index (small caps), all with average gains of 2% to 2.6%. 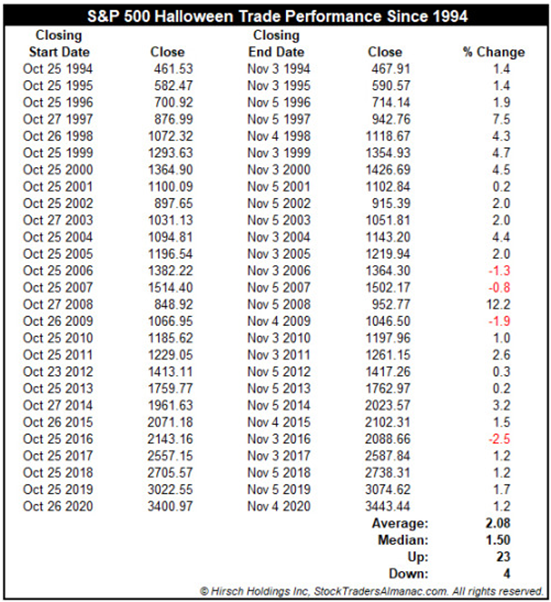 We have discussed many times in the past that the seasonally strong six-month period for equities arrives late October and continues into early May. Perhaps this ‘Halloween Trade’ is the stretch that typically kickstarts this relatively positive time frame for risk assets. The specific period is known to be October 28th to May 5th for equities in general. However, the Stock Market Almanac has pointed out that this year, their proprietary Seasonal MACD Buy Signal actually triggered a buy signal back on October 8th. This indicator, in combination with what is typically the better six-month stretch, is an encouraging sign.